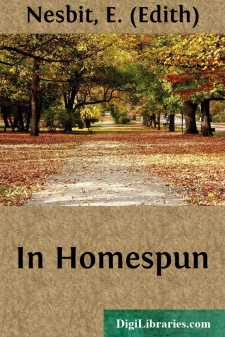 MY cousin Sarah and me had only one aunt between us, and that was my Aunt Maria, who lived in the little cottage up by the church.

Now my aunt had a tidy little bit of money laid by, which she couldn't in reason expect to carry with her when her time came to go, wherever it was she might go to, and a houseful of furniture, old-fashioned, but strong and good still. So of course Sarah and I were not behindhand in going up to see the old lady, and taking her a pot or so of jam in fruiting season, or a turnover, maybe, on a baking-day, if the oven had been steady and the baking turned out well. And you couldn't have told from aunt's manner which of us she liked best; and there were some folks who thought she might leave half to me and half to Sarah, for she hadn't chick nor child of her own.

But aunt was of a having nature, and what she had once got together she couldn't bear to see scattered. Even if it was only what she had got in her rag-bag, she would give it to one person to make a big quilt of, rather than give it to two persons to make two little quilts.

So Sarah and me, we knew that the money might come to either or neither of us, but go to both it wouldn't.

Now, some people don't believe in special mercies, but I have always thought there must have been something out of the common way for things to happen as they did the day Aunt Maria sprained her ankle. She sent over to the farm where we were living with my mother (who was a sensible woman, and carried on the farm much better than most men would have done, though that's neither here nor there) to ask if Sarah or me could be spared to go and look after her a bit, for the doctor said she couldn't put her foot to the ground for a week or more.

Now, the minister I sit under always warns us against superstition, which, I take it, means believing more than you have any occasion to. And I'm not more given to it than most folks, but still I always have said, and I always shall say, that there's a special Providence above us, and it wasn't for nothing that Sarah was laid up with a quinsy that very morning. So I put a few things together—in Sarah's hat-tin, I remember, which was handier to carry than my own—and I went up to the cottage.

Aunt was in bed, and whether it was the sprained ankle or the hot weather I don't know, but the old lady was cantankerous past all believing.

'Good-morning, aunt,' I said, when I went in, 'and however did this happen?'

'Oh, you've come, have you?' she said, without answering my question, 'and brought enough luggage to last you a year, I'll be bound. When I was young, a girl could go to spend a week without nonsense of boxes or the like. A clean shift and a change of stockings done up in a cotton handkerchief—that was good enough for us. But now, you girls must all be young ladies. I've no patience with you.'

I didn't answer back, for answering back is a poor sort of business when the other person is able to make you pay for every idle word. Of course, it's different if you haven't anything to lose by it....