In Doublet and Hose A Story for Girls 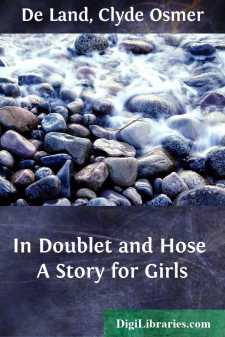 CHAPTER I A QUESTION OF SKILL

It was June, and the peaceful stillness of a summer’s day hung over an ancient wood which lay in the heart of the New Forest near the village of Lyndhurst. The wood was a part of a large demesne which had at one time been bordered by hedges of yew and holly, but these, having been untrimmed for years, had grown into great bushes which in many places were choked up by underwood and brambles.

The forest stretched in every direction. Wood after wood rose before the eye, masses of color, the birches hung with softest green, the oak boughs breaking into amber and olive made doubly bright by the dark gloom of the firs. Wide-branched oaks were intermingled with beeches and copsewood of various descriptions so closely in some places as to intercept the sunshine. In others the trees receded from each other, forming wide vistas that gave glimpses of other recesses of sylvan solitude.

Down the long sunlit glades the gold belted bees sounded their humming horns through every flowery town of the weald. Gauze-winged dragon-flies darted hither and thither while butterflies of every hue sailed by on wings of sheeny bronze. In the bracken wild roses rioted in the richest profusion; the foxglove blazed like pillars of fire through the shadowy underwood and the woodbine flaunted its tall head proudly among the leaves. A gentle breeze rustled the fern, and breathed upon the quaking grass, setting its beautiful spikelets in motion until they seemed like fairy bells rung by elfin fingers. The flutter and hum of the wild things served but to intensify the stillness of the wood.

All at once the deep bass notes of a hound broke upon the air. Louder and louder grew the baying, and soon from out of the purplish shade of the trees there dashed a large greyhound followed by a laughing, panting maiden.

“Content thee, Echo,” she cried flinging herself upon the sward under a wide-spreading oak. “I have breath to follow thee no more. Rest until our good cousin joins us.”

The dog obediently stretched himself by her side, and once more quiet reigned in the wold. Presently the maiden sat up with an impatient movement.

“He tarries long,” she said throwing a mass of auburn curls from a broad, low brow. “Marry! I fear that we have done but an ill turn to the good Hugh.”

As she spoke the form of an elderly man emerged from the trees and approached her slowly. He was withered and thin and though but fifty years of age seemed much older. His doublet and hose were of some dark stuff and his short cloak was surmounted by a huge ruff, the edges of which almost joined the brim of the small, high, cone-shaped hat which partly concealed his gray hair.

“By the mass, Francis! methinks that thou dost grow more unmannerly each day. Thou art as unthinking as the butterfly, else thou wouldst not have burdened my fore-wearied flesh with thy bow.”

“In sooth, it was but a poor return for thy kindness to leave thee my bow,” observed the girl as she hastened to relieve him of the crossbow that he held....