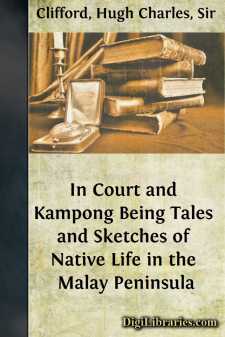 The nineteen tales and sketches, which are enclosed within the covers of this Book, relate to certain brown men and obscure things in a distant and very little known corner of the Earth. The Malay Peninsula—that slender tongue of land which projects into the tepid seas at the extreme south of the Asiatic Continent—is but little more than a name to most dwellers in Europe. But, even in the Peninsula itself, and to the majority of those white men whose whole lives have been passed in the Straits of Malacca, the East Coast and the remote interior, of which I chiefly write, are almost as completely unknown.

It has been my endeavour, in writing this book, to give some idea of the lives lived in these lands by Europeans whose lot has led them away from the beaten track; by the aboriginal tribes of Sâkai and SÄ•mang; but, above all, by those Malays who, being yet untouched by contact with white men, are still in a state of original sin. My stories deal with natives of all classes; dwellers in the Courts of Kings; peasants in their kampongs, or villages, by the rivers and the rice-fields; and with the fisher-folk on the seashore. I have tried to describe these things as they appear when viewed from the inside, as I have myself seen them during the many dreary years that I have spent in the wilder parts of the Malay Peninsula. It will be found that the pictures thus drawn are not always attractive—what man's life, when viewed from the inside, ever is pretty to look at? But I have told my tales of these curious companions of my exile, nothing extenuating, but setting down nought in malice.

The conditions of life of which I write, more especially in those sketches and tales which deal with native society in an Independent Malay State, are rapidly passing away. Nor can this furnish matter for regret to any one who knew them as they were and still are in some of the wilder and more remote regions of the Peninsula. One may, perhaps, feel some measure of sentimental sorrow that the natural should here, as elsewhere, be replaced by the artificial; one may recognise with sufficient clearness that the Malay in his natural unregenerate state is more attractive an individual than he is apt to become under the influence of European civilisation; but no one who has seen the horrors of native rule, and the misery to which the people living under it are ofttimes reduced, can find room to doubt that, its many drawbacks notwithstanding, the only salvation for the Malays lies in the increase of British influence in the Peninsula, and in the consequent spread of modern ideas, progress, and civilisation.

I feel this so strongly that, in common with many of my countrymen, I am content to devote the best years of my life to an attempt to bring about some of those revolutions in facts and in ideas which we hold to be for the ultimate good of the race. None the less, however, this book has been written in a spirit of the deepest sympathy with all classes of Malays, and I have striven throughout to appreciate the native point of view, and to judge the people and their actions by their own standards, rather than by those of a White Man living in their midst.

With regard to the tales themselves, many of them have been told to me by natives, and all are more or less founded on fact. Some of the incidents related have come under my personal observation, and for the truth of these I can vouch. For the accuracy of the remaining stories others are responsible, and I can only be held answerable for the framing of the pictures.