In Camp With A Tin Soldier 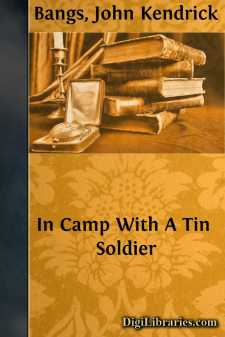 "What's that?" cried Jimmieboy, rising from his pillow on the nursery couch, and looking about him, his eyes wide open with astonishment.

"What's what?" asked mamma, who was sitting near at hand, knitting a pair of socks for a small boy she knew who would shortly want them to keep his feet warm when he went off coasting with his papa.

"I thought I heard soldiers going by," returned Jimmieboy, climbing up on the window-sill and gazing anxiously up and down the street. "There were drums playing."

"I didn't hear them," said mamma. "I guess you imagined it. Better lie down again, Jimmieboy, and rest. You will be very tired when papa gets home, and you know if you are tired you'll have to go to bed instead of taking supper with him, and that would be too bad on his birthday."

"Is papa really going to have a birthday to-day?" queried the little fellow. "And a cake with candles in it?"

"Yes," answered mamma. "Two cakes with candles on them, I think," she added.

"What's he to have two cakes for? I had only one," said Jimmieboy.

"One cake wouldn't be big enough to hold all the candles," mamma answered. "You see, papa is a few years older than you are—almost six times as old to-day, and if he has a candle for every year, he'll have to have two cakes to hold them all."

"How many is thirty?" asked Jimmieboy.

"Never mind, dearest," returned mamma, giving Jimmieboy a kiss. "Don't you bother about that. Just close those little peepers and go to sleep."

So Jimmieboy closed his eyes and lay very still for a few minutes. He was not sorry to do it, either, because he really was quite sleepy. He ought to have had his nap before luncheon, but his mamma had been so busy all the morning, making ready for his papa's birthday dinner, that she had forgotten to call him in from the playground, where he was so absorbed in the glorious sport of seesawing with his little friend from across the way that he never even thought of his nap. As many as five minutes must have slipped by before Jimmieboy opened his eyes again, and I doubt if he would have done so even then had he not heard repeated the unmistakable sounds of drums.

"I did hear 'em that time, mamma," he cried, starting up again and winking very hard, for the sand-man had left nearly a pint of sand in Jimmieboy's eyes. "I heard 'em plain as could be."

To this second statement of Jimmieboy's that he heard soldiers going by somewhere, there was no answer, for there was no one in the room to give him one. His mamma, supposing that he had finally fallen asleep, had tiptoed out of the room and was now down stairs, so that the little fellow found himself alone. As a rule he did not like to be alone, although he knew of no greater delight than that of conversing with himself, and he was on the point of running to the door to call to his mother to return, when his attention was arrested by some very curious goings-on in a favorite picture of his that hung directly over the fire-place.

This picture was not, under ordinary circumstances, what any one would call a lively picture—in fact, it was usually a very quiet one, representing a country lane shaded on either side by great oak-trees that towered up into the sky, their branches overhanging the road so as to form a leafy arch, through which only an occasional ray of the sun ever found its way. From one end to the other of this beautiful avenue there were no signs of life, save those which were presented by the green leaves of the trees themselves, and the purling brook, bordered by grasses and mosses, that was visible a short distance in; no houses or cows or men or children were there in sight....