"Imperialism" and "The Tracks of Our Forefathers" 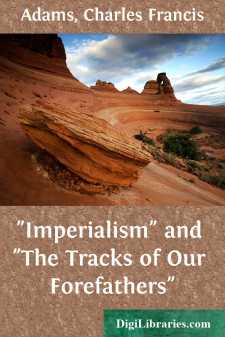 What the feast of the Passover was to the children of Israel, that the days between the nineteenth of December and the fourth of January—the Yuletide—are and will remain to the people of New England. The Passover began "in the first month on the fourteenth day of the month at even," and it lasted one week, "until the one and twentieth day of the month at even." It was the period of the sacrifice of the Paschal lamb, and the feast of unleavened bread; and of it as a commemoration it is written, "When your children shall say unto you, What mean ye by this service? that ye shall say, It is the sacrifice of the Lord's passover, who passed over the houses of the children of Israel in Egypt, when he smote the Egyptians. Now the sojourning of the children of Israel, who dwelt in Egypt, was four hundred and thirty years." And thus, by their yearly Passover, were the Jewish congregations of old put in mind what farewell they took of the land of Egypt.

So our own earliest records tell us that it was on the morning of Saturday, of what is now the nineteenth of December, that the little exploring party from the Mayflower, then lying at her anchor in Provincetown Harbor, after a day and night of much trouble and danger, sorely buffeted by wind and wave in rough New England's December seas, found themselves on an island in Plymouth Bay. It was a mild, "faire sunshining day. And this being the last day of the weeke, they prepared ther to keepe the Sabath. On Munday they sounded the harbor, and marched into the land, and found a place fitt for situation. So they returned to their shipp againe [at Provincetown] with this news. On the twenty-fifth of December they weyed anchor to goe to the place they had discovered, and came within two leagues of it, but were faine to bear up againe; but the twenty-sixth day, the winde came faire, and they arrived safe in this harbor. And after wards tooke better view of the place, and resolved wher to pitch their dwelling; and the fourth day [of January] begane to erecte the first house for commone use to receive them and their goods." Such, in the quaint language of Bradford, is the calendar of New England's Passover; and, beginning on the nineteenth of December, it ends on the fourth of January, covering as nearly as may be the Christmas holyday period.

Is there any better use to which the Passover anniversary can be put than to retrospection? "And when your children shall say unto you, What mean you by this service? ye shall say, It is the sacrifice of the Lord's passover, when he smote the Egyptians, and delivered our houses." So the old story is told again, being thus kept ever green in memory; and, in telling it, the experiences of the past are brought insensibly to bear on the conditions of the present. Thus, once a year, like the Israelites of old, we, as a people, may take our bearings and verify our course, as we plunge on out of the infinite past into the unknowable future. It is a useful practice; and we are here this first evening of our Passover period to observe it.

This, too, is an Historical Society,—that of Lexington, "a name," as, when arraigned before the tribunal of the French Terror, Danton said of his own, "tolerably known in the Revolution;" and I am invited to address you because I am President of the Massachusetts Historical Society, the most venerable organization of the sort in America, perhaps in the world. Thus, to-night, though we shall necessarily have to touch on topics of the day, and topics exciting the liveliest interest and most active discussion, we will in so doing look at them,—not as politicians or as partisans, nor from the commercial or religious side, but solely from the historical point of view. We shall judge of the present in its relations to the past. And, unquestionably, there is great satisfaction to be derived from so doing; the mere effort seems at once to take us into another atmosphere,—an atmosphere as foreign to unctuous cant as it is to what is vulgarly known as "electioneering taffy." This evening we pass away from the noisy and heated turmoil of partisan politics, with its appeals to prejudice, passion, and material interest, into the cool of a quiet academic discussion....