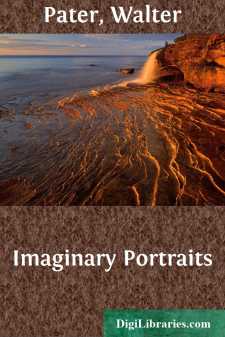 I. A PRINCE OF COURT PAINTERS EXTRACTS FROM AN OLD FRENCH JOURNAL

[5] They have been renovating my father's large workroom. That delightful, tumble-down old place has lost its moss-grown tiles and the green weather-stains we have known all our lives on the high whitewashed wall, opposite which we sit, in the little sculptor's yard, for the coolness, in summertime. Among old Watteau's work-people came his son, "the genius," my father's godson and namesake, a dark-haired youth, whose large, unquiet eyes seemed perpetually wandering to the various drawings which lie exposed here. My father will have it that he is a genius indeed, and a painter born. We have had our September Fair in the Grande Place, a wonderful stir of sound and colour in the wide, open space beneath our windows. And just where the crowd was busiest young Antony was found, hoisted into one of those empty niches of the old Hôtel de Ville, sketching the scene to the life, but with a [6] kind of grace—a marvellous tact of omission, as my father pointed out to us, in dealing with the vulgar reality seen from one's own window—which has made trite old Harlequin, Clown, and Columbine, seem like people in some fairyland; or like infinitely clever tragic actors, who, for the humour of the thing, have put on motley for once, and are able to throw a world of serious innuendo into their burlesque looks, with a sort of comedy which shall be but tragedy seen from the other side. He brought his sketch to our house to-day, and I was present when my father questioned him and commended his work. But the lad seemed not greatly pleased, and left untasted the glass of old Malaga which was offered to him. His father will hear nothing of educating him as a painter. Yet he is not ill-to-do, and has lately built himself a new stone house, big and grey and cold. Their old plastered house with the black timbers, in the Rue des Cardinaux, was prettier; dating from the time of the Spaniards, and one of the oldest in Valenciennes.

Chiefly through the solicitations of my father, old Watteau has consented to place Antony with a teacher of painting here. I meet him betimes on the way to his lessons, as I return from Mass; for he still works with the masons, [7] but making the most of late and early hours, of every moment of liberty. And then he has the feast-days, of which there are so many in this old-fashioned place. Ah! such gifts as his, surely, may once in a way make much industry seem worth while. He makes a wonderful progress. And yet, far from being set-up, and too easily pleased with what, after all, comes to him so easily, he has, my father thinks, too little self-approval for ultimate success. He is apt, in truth, to fall out too hastily with himself and what he produces. Yet here also there is the "golden mean." Yes! I could fancy myself offended by a sort of irony which sometimes crosses the half-melancholy sweetness of manner habitual with him; only that as I can see, he treats himself to the same quality....