Illustration Of The Method Of Recording Indian Languages From the First Annual Report of the Bureau of Ethnology, Smithsonian Institution 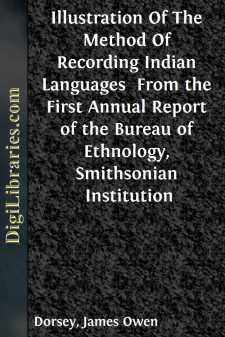 Once upon a time the Rabbit dwelt in a lodge with no one but his grandmother. And it was his custom to go hunting very early in the morning. No matter how early in the morning he went, a person with very long feet had been along, leaving a trail. And he (the Rabbit), wished to know him. "Now," thought he, "I will go in advance of the person." Having arisen very early in the morning, he departed. Again it happened that the person had been along, leaving a trail. Then he (the Rabbit) went home. Said he, "Grandmother, though I arrange for myself to go first, a person anticipates me (every time). Grandmother, I will make a snare and catch him." "Why should you do it?" said she. "I hate the person," he said. And the Rabbit departed. When he went, the foot-prints had been along again. And he lay waiting for night (to come). And he made a noose of a bow-string, putting it in the place where the foot-prints used to be seen. And he reached there very early in the morning for the purpose of looking at his trap. And it happened that he had caught the Sun. Running very fast, he went homeward to tell it. " Grandmother, I have caught something or other, but it scares me. Grandmother, I wished to take my bow-string, but I was scared every time," said he. He went thither with a knife. And he got very near it. "You have done wrong; why have you done so? Come hither and untie me," said the Sun. The Rabbit, although he went thither, was afraid, and kept on passing partly by him (or, continued going by a little to one side). And making a rush, with his head bent down (and his arm stretched out), he cut the bow-string with the knife. And the Sun had already gone on high. And the Rabbit had the hair between his shoulders scorched yellow, it having been hot upon him (as he stooped to cut the bow-string). (And the Rabbit arrived at home.) "Itcitci+!! O grandmother, the heat has left nothing of me," said he. She said, "Oh! my grandchild! I think that the heat has left nothing of him for me." (From that time the rabbit has had a singed spot on his back, between the shoulders.)