If You're Going to Live in the Country 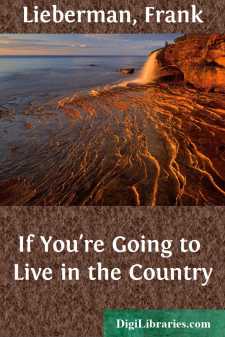 CHAPTER I Why Live in the Country?

The urge to live in the country besets most of us sooner or later. Spring with grass vividly green, buds bursting and every pond a bedlam of the shrill, rhythmic whistle of frogs, is the most dangerous season. Some take a walk in the park. Others write for Strout's farm catalogues, read them hungrily and are well. But there are the incurables. Their fever is fed for months and years by the discomforts and amenities of city life. Eventually they escape and contentedly become box numbers along rural postal routes.

Why do city-bred people betake themselves to the country? The surface reasons are as many as why they are Republicans or Democrats, but the basic one is escape from congestion and confusion. For themselves or their children their goal is the open country beyond the suburban fringe. Here the children, like young colts, can be turned out to run and race, kick up their heels and enjoy life, free of warnings to be quiet lest they annoy the elderly couple in the apartment below or the nervous wreck the other side of that suburban privet hedge.

The day and night rattle and bang of the city may go unnoticed for years but eventually it takes its toll. Then comes a great longing to get away from it all. If family income is independent of salary earned by a city job, there is nothing to the problem. Free from a desk in some skyscraper that father must tend from nine to five, such a family can select its country home hours away from the city. Ideal! But few are so fortunate. Most of us consider ourselves lucky to have that city job. It is to be treated with respect and for us the answer lies in locating just beyond those indefinite boundaries that limit the urban zone. With the larger cities, this may be as much as fifty miles from the business center; with smaller ones the gap can be bridged speedily by automobile.

Going to live in the country, viewed dispassionately as an accountant's balance sheet, has attributes that can be recorded in black ink as well as those that require a robust crimson. If you really want a place where you need not be constantly rubbing elbows with the rest of the world; where you can cultivate something more ambitious than window boxes or an eight by ten pocket-handkerchief garden; where subways and street clatter can be forgotten; your black column will be far longer than the one in red. But if nothing feels so good to your foot as smooth unyielding pavements; if the multicolored electric sign of a moving picture palace is more entrancing than a vivid sunset; you are at heart a city bird, intended by temperament to nest behind walls of brick and steel. There is nothing you can do about it either. In the country the nights are so black; the birds at dawn too noisy; and Nature when she storms and scolds, is a fish-wife. Possibly you can learn to endure it all but will the game be worth the candle? Without true fondness for outdoors and an inner urge for a measure of seclusion, life in the country is drear....