If Winter Don't A B C D E F Notsomuchinson 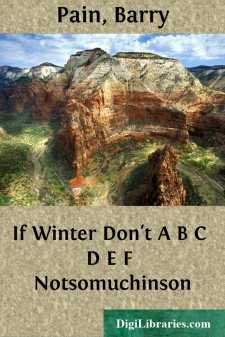 “If Winter Comes” placed its author not only as a Best Seller, but as one of the Great Novelists of to-day. Not always are those royalties crowned by those laurels. Tarzan (of, if I remember rightly, the Apes) never won the double event. And I am told by superior people that, intellectually, Miss Ethel M. Dell takes the hindmost. Personally, I found “If Winter Comes” a most sympathetic and interesting book. I think there are only two points on which I should be disposed to quarrel with it. Firstly, though Nona is a real creation, Effie is an incredible piece of novelist’s machinery. Secondly, I detest the utilization of the Great War at the present day for the purposes of fiction. It is altogether too easy. It buys the emotional situation ready-made. It asks the reader’s memory to supplement the writer’s imagination. And this is not my sole objection to its use.

I wonder if I might, without being thought blasphemous, say a word or two about the Great Novelists of to-day. They have certain points of resemblance. I do not think that over-states it.

They have the same little ways. They divide their chapters into sections, and number the sections in plain figures. This is quite pontifical, and lends your story the majesty of an Act of Parliament. The first man who did it was a genius. And the other seven hundred and eighteen showed judgment. I propose to use it myself when I remember it.

Then there is the three-dot trick. At one time those dots indicated an omission. To-day, some of our best use them as an equivalent of the cinema fade-out. Those dots prolong the effect of a word or sentence; they lend it an afterglow. You see what I mean? Afterglow ...

One must mention, too, the staccato style—the style that makes the printer send the boy out for another hundred gross of full-stops. All the Great Novelists of to-day use it, more or less.

Let us see what can be done with it. Here, for instance, is a sentence which was taught me in the nursery, for its alleged tongue-twisting quality: “She stood at the door of Burgess’s fish-sauce shop, Strand, welcoming him in.” In that form it is not impressive, but now note what one of these staccato merchants might make of it.

“Across the roaring Strand red and green lights spelling on the gloom. ‘BURGESS’S FISH-SAU.’ A moment’s darkness and again ‘BURGESS’S FISH-SAU.’ Like that. Truncated. The final —CE not functioning. He had to look though it hurt him. Hurt horrible. Damnably. And his eyes traveled downward.

“Suddenly and beyond hope she! Isobel-at-the-last. Standing in the doorway. White on black. Slim. Willowy. Incomparable. Incommensurable. She saw him and her lips rounded to a call. He sensed it through the traffic. Come in. Calling and calling. Come in.

It is like a plaintive hymn sung to a banjo accompaniment.

Incidentally it illustrates another favorite trick of these gentlemen—the introduction of a commonplace or even jarring detail into a romantic scene in order to increase its appearance of reality. It is quite a good trick.

And sometimes, not every day but sometimes, one gets a little weary even of the best tricks. Need the author depend quite so much on the printer for his effects? Scenes and passages in a book seem to be standing very near the edge, and the wanton thought occurs to one that a little shove would send them over. In fact, one gets irritable. And then anything bad may happen. This parody for instance.

IF WINTER DON’T CHAPTER I

Oh, drop it! Let us rather listen to Mr. Alfred Jingle, solicitor, talking to his artist friend.

“Met Sharper yesterday. Remember him at the old school? Flap Sharper we called him. Not that they really did flap. His ears, I mean. They just crept up and bent over when he was thinking hard. People came to see it. Came from miles around.

“Rum chap. Rum ways. Never agreed with anybody present, including himself....