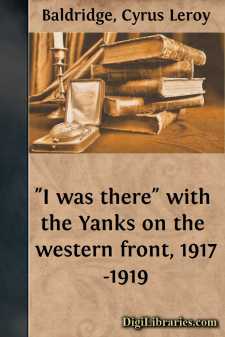 These Sketches were made during a year's service as a camion driver with the French army in the Chemin-des-Dames sector and a year's service with the A.E.F. as an infantry private on special duty with "The Stars and Stripes," the official A.E.F. newspaper. Most of them were drawn at odd minutes during the French push of 1917 near Fort Malmaison, at loading parks and along the roadside while on truck convoy, and while on special permission to draw and paint with the French army given me by the Grand Quartier Gènèral during the time I was stationed at Soissons. The rest were drawn on American fronts from the Argonne to Belgium as my duties took me from one offensive to another.

It has been a keen regret to me that my artistic skill has been so unequal to these opportunites. The sketches do not sufficiently show war for the stupid horror I know it to be.

I hope, however, they may serve as a record of doughboy types, of the people he lived with in France, with whom he suffered and by whose side he fought.

Many appeared first in "The Stars and Stripes," "Leslie's Weekly", and "Scribner's Magazine", through the courtesy of whose editors I am now enabled to reprint them.

Seicheprey.America's old home sector—first trenches entirely under their own command.

THE LINE Form a line! Get in line! From the time that I enlisted And since Jerry armististed I've been standing, kidding, cussing, I've been waiting, fuming, fussing, In a line. I have stood in line in mud and slime and sleet, With the dirty water oozing from my feet, I have soaked and slid and slipped, While my tacky slicker dripped, And I wondered what they'd hand me out to eat. Get in line! For supplies and for inspections, With the dust in four directions, For a chance to scrub the dirt off, In the winter with my shirt off, In a line. I have sweated in an August training camp, That would make a prohibition town look damp, Underneath my dinky cap While the sun burned off my map And I waited for some gold-fish (and a cramp!). Get in line! For rice, pay-day, pills, and ration, For corned-willy, army fashion, In Hoboken, in the trenches, In a station with the Frenchies, In a line. I've been standing, freezing, sweating, Pushing, shoving, wheezing, fretting, And I won't be soon forgetting Though I don't say I'm regretting That I stood there, with my buddies, In a line.