Hydesville The Story of the Rochester Knockings, Which Proclaimed the Advent of Modern Spiritualism 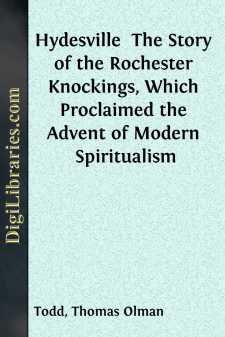 The interesting events narrated in this book which occurred at Hydesville, in the house of the Fox Family, are those by which Modern Spiritualism made its advent into this world as a new revelation in spiritual matters.

History is not without its reliable records of similar phenomena, but, just as many scientific men have experimented and stopped short of the gateway of the actual discovery of Nature's secrets, so, many who came in contact with phenomena similar to those of Hydesville whilst being mystified as to the meaning of the operating power, stopped short of the actual discovery that "It can see as well as hear." Notably in the case of the disturbances at Mr. Mompesson's house at Tedworth (1661—1663) and Mr. Wesley's parsonage at Epworth (1716—1717).

The early literature of the Spiritualist Movement is replete with most interesting records of phenomena of bewildering variety, but during the past twenty years the demand for literature on this absorbing subject has taken a more philosophic turn. The phenomena are admittedly real. The philosophy is the subject of debate, hence these early records are fast going out of print and becoming difficult to obtain.

Some few years ago, when the writer paid what proved to be his last visit to Mrs. Emma Hardinge Britten, he was deeply impressed with her desire that the early history of the Spiritualist Movement, for which she spent the greater part of her industrious life, and with which she had been so intimately connected, should not be allowed to pass into oblivion, and that at least the story of HYDESVILLE should be published in a handy form and at a reasonable price. For this purpose she presented him with what appeared to be her only remaining copy of her invaluable historical work "Modern American Spiritualism," and requested him to undertake that duty.

The incidents recorded in the following pages are based chiefly on the information given in the work mentioned above, and considerable use is made of the actual words and sentences penned by Mrs. Britten; these are given without quotation marks. Some portions however have been re-written to adapt them to the requirements of the present book, whilst a few other facts have been gathered from various sources, chiefly Robert Dale Owen's "Footfalls on the Boundary of Another World." Both Mrs. Britten and Mr. Owen were personally acquainted with the Fox family and many of the persons incidentally mentioned in connection with the phenomena at HYDESVILLE—a fact which gives superior weight to their records.

Having been a sad invalid since June of this year, and still suffering, I do not quite remember whether I have or not written to you on the subject to which I desire to devote this poor scrawl. If I have not done so hitherto—permit me to say,—altho' I have been obliged from severe illness to suspend my platform work and writings, I am as much interested in the earnest desire to help the progress of Spiritualism as I have been in my long years of past devotion to that cause....