Hunting the Skipper The Cruise of the "Seafowl" Sloop 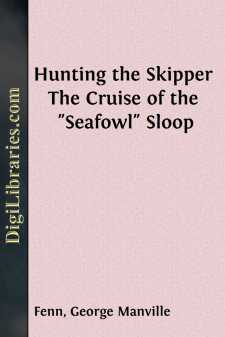 “Dicky, dear boy, it’s my impression that we shall see no blackbird’s cage to-day.”

“And it’s my impression, Frank Murray, that if you call me Dicky again I shall punch your head.”

“Poor fellow! Liver, decidedly,” said the first speaker, in a mock sympathetic tone. “Look here, old chap, if I were you, I’d go and ask Jones to give me a blue pill, to be followed eight hours later by one of his delicious liqueurs, all syrup of senna.”

“Ugh!” came in a grunt of disgust, followed by a shudder. “Look here, Frank, if you can’t speak sense, have the goodness to hold your tongue.”

The speakers were two manly looking lads in the uniform of midshipmen of the Royal Navy, each furnished with a telescope, through which he had been trying to pierce the hot thick haze which pretty well shut them in, while as they leaned over the side of Her Majesty’s ship Seafowl, her sails seemed to be as sleepy as the generally smart-looking crew, the light wind which filled them one minute gliding off the next, and leaving them to flap idly as they apparently dozed off into a heavy sleep.

“There, don’t be rusty, old fellow,” said the first speaker.

“Then don’t call me by that absurd name—Dicky—as if I were a bird!”

“There, I don’t wonder at your being upset; this heat somehow seems to soak into a fellow and melt all the go out of one. I’m as soft as one of those medusae—jellyfish—what do you call them?—that float by opening and shutting themselves, all of a wet gasp, as one might say.”

“Horrible it is, sir, as our fellows say. Well, live and learn, and I’ve learned one thing, and that is if I retire from the service as Captain—no, I’ll be modest—Commander Murray, R.N., I shall not come and settle on the West Coast of Africa.”

“Settle on the West Coast of Africa, with its fevers and horrors? I should think not!” said the other. “Phew! How hot it is! Bah!” he half snorted angrily.

“That brass rail. I placed my hand upon it—regularly burned me.”

“Mem for you, old chap—don’t do it again. But, I say, what is the good of our hanging about here? We shall do no good, and it’s completely spoiling the skipper’s temper.”

“There you go again.”

“Pardon, mon ami! Forgot myself. Plain Richard—there. But that’s wrong. One can’t call you plain Richard, because you’re such a good-looking chap.”

“What’s that wrong too? Oh, what an unlucky beggar I am! But I say, didn’t you see the skipper?”

“I saw him, of course. But what about him? I saw nothing particular.”

“I say, Frank, look here,” cried the other; “can’t you say downright what you have to say, without prosing about like the jolly old preface to an uninteresting book?”