Hunting the Grisly and Other Sketches 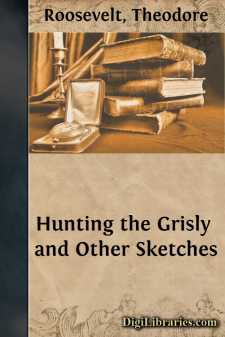 When we became a nation in 1776, the buffaloes, the first animals to vanish when the wilderness is settled, roved to the crests of the mountains which mark the western boundaries of Pennsylvania, Virginia, and the Carolinas. They were plentiful in what are now the States of Ohio, Kentucky, and Tennessee. But by the beginning of the present century they had been driven beyond the Mississippi; and for the next eighty years they formed one of the most distinctive and characteristic features of existence on the great plains. Their numbers were countless—incredible. In vast herds of hundreds of thousands of individuals, they roamed from the Saskatchewan to the Rio Grande and westward to the Rocky Mountains. They furnished all the means of livelihood to the tribes of Horse Indians, and to the curious population of French Metis, or Half-breeds, on the Red River, as well as to those dauntless and archtypical wanderers, the white hunters and trappers. Their numbers slowly diminished, but the decrease was very gradual until after the Civil War. They were not destroyed by the settlers, but by the railways and the skin hunters.

After the ending of the Civil War, the work of constructing trans-continental railway lines was pushed forward with the utmost vigor. These supplied cheap and indispensable, but hitherto wholly lacking, means of transportation to the hunters; and at the same time the demand for buffalo robes and hides became very great, while the enormous numbers of the beasts, and the comparative ease with which they were slaughtered, attracted throngs of adventurers. The result was such a slaughter of big game as the world had never before seen; never before were so many large animals of one species destroyed in so short a time. Several million buffaloes were slain. In fifteen years from the time the destruction fairly began the great herds were exterminated. In all probability there are not now, all told, five hundred head of wild buffaloes on the American continent; and no herd of a hundred individuals has been in existence since 1884.

The first great break followed the building of the Union Pacific Railway. All the buffaloes of the middle region were then destroyed, and the others were split into two vast sets of herds, the northern and the southern. The latter were destroyed first, about 1878; the former not until 1883. My own chief experience with buffaloes was obtained in the latter year, among small bands and scattered individuals, near my ranch on the Little Missouri; I have related it elsewhere. But two of my kinsmen were more fortunate, and took part in the chase of these lordly beasts when the herds still darkened the prairie as far as the eye could see.

During the first two months of 1877, my brother Elliott, then a lad not seventeen years old, made a buffalo-hunt toward the edge of the Staked Plains in Northern Texas. He was thus in at the death of the southern herds; for all, save a few scattering bands, were destroyed within two years of this time....