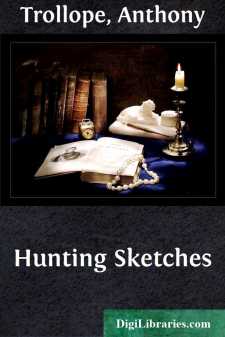 It seems to be odd, at first sight, that there should be any such men as these; but their name and number is legion. If we were to deduct from the hunting-crowd farmers, and others who hunt because hunting is brought to their door, of the remainder we should find that the "men who don't like it" have the preponderance. It is pretty much the same, I think, with all amusements. How many men go to balls, to races, to the theatre, how many women to concerts and races, simply because it is the thing to do? They have perhaps, a vague idea that they may ultimately find some joy in the pastime; but, though they do the thing constantly, they never like it. Of all such men, the hunting men are perhaps the most to be pitied.

They are easily recognized by any one who cares to scrutinize the men around him in the hunting field. It is not to be supposed that all those who, in common parlance, do not ride, are to be included among the number of hunting men who don't like it. Many a man who sticks constantly to the roads and lines of gates, who, from principle, never looks at a fence, is much attached to hunting. Some of those who have borne great names as Nimrods in our hunting annals would as life have led a forlorn-hope as put a horse at a flight of hurdles. But they, too, are known; and though the nature of their delight is a mystery to straight-going men, it is manifest enough, that they do like it. Their theory of hunting is at any rate plain. They have an acknowledged system, and know what they are doing. But the men who don't like it, have no system, and never know distinctly what is their own aim. During some portion of their career they commonly try to ride hard, and sometimes for a while they will succeed. In short spurts, while the cherry-brandy prevails, they often have small successes; but even with the assistance of a spur in the head they never like it.

Dear old John Leech! What an eye he had for the man who hunts and doesn't like it! But for such, as a pictorial chronicler of the hunting field he would have had no fame. Briggs, I fancy, in his way did like it. Briggs was a full-blooded, up-apt, awkward, sanguine man, who was able to like anything, from gin and water upwards. But with how many a wretched companion of Briggs' are we not familiar? men as to whom any girl of eighteen would swear from the form of his visage and the carriage of his legs as he sits on his horse that he was seeking honour where honour was not to be found, and looking for pleasure in places where no pleasure lay for him.

But the man who hunts and doesn't like it, has his moments of gratification, and finds a source of pride in his penance. In the summer, hunting does much for him. He does not usually take much personal care of his horses, as he is probably a town man and his horses are summered by a keeper of hunting stables; but he talks of them. He talks of them freely, and the keeper of the hunting stables is occasionally forced to write to him. And he can run down to look at his nags, and spend a few hours eating bad mutton chops, walking about the yards and paddocks, and, bleeding halfcrowns through the nose....