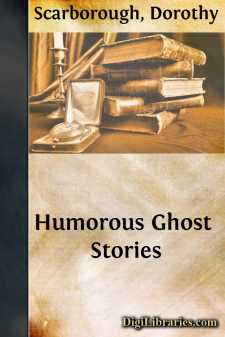 The humorous ghost is distinctly a modern character. In early literature wraiths took themselves very seriously, and insisted on a proper show of respectful fear on the part of those whom they honored by haunting. A mortal was expected to rise when a ghost entered the room, and in case he was slow about it, his spine gave notice of what etiquette demanded. In the event of outdoor apparition, if a man failed to bare his head in awe, the roots of his hair reminded him of his remissness. Woman has always had the advantage over man in such emergency, in that her locks, being long and pinned up, are less easily moved—which may explain the fact (if it be a fact!) that in fiction women have shown themselves more self-possessed in ghostly presence than men. Or possibly a woman knows that a masculine spook is, after all, only a man, and therefore may be charmed into helplessness, while the feminine can be seen through by another woman and thus disarmed. The majority of the comic apparitions, curiously enough, are masculine. You don't often find women wraithed in smiles—perhaps because they resent being made ridiculous, even after they're dead. Or maybe the reason lies in the fact that men have written most of the comic or satiric ghost stories, and have chivalrously spared the gentler shades. And there are very few funny child-ghosts—you might almost say none, in comparison with the number of grown-ups. The number of ghost children of any or all types is small proportionately—perhaps because it seems an unnatural thing for a child to die under any circumstances, while to make of him a butt for jokes would be unfeeling. There are a few instances, as in the case of the ghost baby mentioned later, but very few.

Ancient ghosts were a long-faced lot. They didn't know how to play at all. They had been brought up in stern repression of frivolities as haunters—no matter how sportive they may have been in life—and in turn they cowed mortals into a servile submission. No doubt they thought of men and women as mere youngsters that must be taught their place, since any living person, however senile, would be thought juvenile compared with a timeless spook.

But in these days of individualism and radical liberalism, spooks as well as mortals are expanding their personalities and indulging in greater freedom. A ghost can call his shade his own now, and exhibit any mood he pleases. Even young female wraiths, demanding latchkeys, refuse to obey the frowning face of the clock, and engage in light-hearted ebullience to make the ghost of Mrs. Grundy turn a shade paler in horror. Nowadays haunters have more fun and freedom than the haunted. In fact, it's money in one's pocket these days to be dead, for ghosts have no rent problems, and dead men pay no bills. What officer would willingly pursue a ghostly tenant to his last lodging in order to serve summons on him? And suppose a ghost brought into court demanded trial by a jury of his peers? No—manifestly death has compensations not connected with the consolations of religion....