Human Foods and Their Nutritive Value 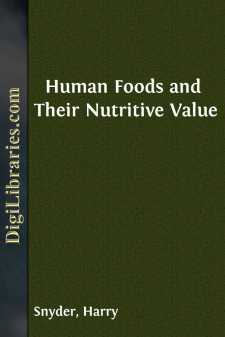 CHAPTER I GENERAL COMPOSITION OF FOODS

1. Water.—All foods contain water. Vegetables in their natural condition contain large amounts, often 95 per cent, while in meats there is from 40 to 60 per cent or more. Prepared cereal products, as flour, corn meal, and oatmeal, which are apparently dry, have from 7 to 14 per cent. In general the amount of water in a food varies with the mechanical structure and the conditions under which it has been prepared, and is an important factor in estimating the value, as the nutrients are often greatly decreased because of large amounts of water. The water in substances as flour and meal is mechanically held in combination with the fine particles and varies with the moisture content, or hydroscopicity, of the air. Oftentimes foods gain or lose water to such an extent as to affect their weight; for example, one hundred pounds of flour containing 12 per cent of water may be reduced in weight three pounds or more when stored in a dry place, or there may be an increase in weight from being stored in a damp place. In tables of analyses the results, unless otherwise stated, are usually given on the basis of the original material, or the dry substance. Potatoes, for example, contain 2½ per cent of crude protein on the basis of 75 per cent of water; or on a dry matter basis, that is, when the water is entirely eliminated, there is 10 per cent of protein.

The water of foods is determined by drying the weighed material in a water or air oven at a temperature of about 100° C, until all of the moisture has been expelled in the form of steam, leaving the dry matter or material free from water. The determination of dry matter, while theoretically a simple process, is attended with many difficulties. Substances which contain much fat may undergo oxidation during drying; volatile compounds, as essential oils, are expelled along with the moisture; and other changes may occur affecting the accuracy of the work. The last traces of moisture are removed with difficulty from a substance, being mechanically retained by the particles with great tenacity. When very accurate dry matter determinations are desired, the substance is dried in a vacuum oven, or in a desiccator over sulphuric acid, or in an atmosphere of some non-oxidizing gas, as hydrogen.

Fig. 1.—Apparatus used for the Determination of Dry Matter and Ash in Foods. 1, desiccator; 2, muffle furnace for combustion of foods and obtaining ash; 3, water oven for drying food materials.

3. Ash.—The ash, or mineral matter, is that portion obtained by burning or igniting the dry matter at the lowest temperature necessary for complete combustion. The ash in vegetable foods ranges from 2 to 5 per cent and, together with the nitrogen, represents what was taken from the soil during growth. In animal bodies, the ash is present mainly in the bones, but there is also an appreciable amount, one per cent or more, in all the tissues. Ash is exceedingly variable in composition, being composed of the various salts of potassium, sodium, calcium, magnesium, and iron, as sulphates, phosphates, chlorides, and silicates of these elements. There are also other elements in small amounts. In the plant economy these elements take an essential part and are requisite for the formation of plant tissue and the production in the leaves of the organic compounds which later are stored up in the seeds. Some of the elements appear to be more necessary than others, and whenever withheld plant growth is restricted....