How to Write Clearly Rules and Exercises on English Composition 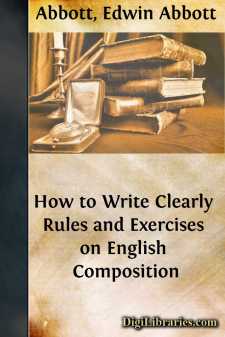 Almost every English boy can be taught to write clearly, so far at least as clearness depends upon the arrangement of words. Force, elegance, and variety of style are more difficult to teach, and far more difficult to learn; but clear writing can be reduced to rules. To teach the art of writing clearly is the main object of these Rules and Exercises.

Ambiguity may arise, not only from bad arrangement, but also from other causes—from the misuse of single words, and from confused thought. These causes are not removable by definite rules, and therefore, though not neglected, are not prominently considered in this book. My object rather is to point out some few continually recurring causes of ambiguity, and to suggest definite remedies in each case. Speeches in Parliament, newspaper narratives and articles, and, above all, resolutions at public meetings, furnish abundant instances of obscurity arising from the monotonous neglect of some dozen simple rules.

The art of writing forcibly is, of course, a valuable acquisition—almost as valuable as the art of writing clearly. But forcible expression is not, like clear expression, a mere question of mechanism and of the manipulation of words; it is a much higher power, and implies much more.

Writing clearly does not imply thinking clearly. A man may think and reason as obscurely as Dogberry himself, but he may (though it is not probable that he will) be able to write clearly for all that. Writing clearly—so far as arrangement of words is concerned—is a mere matter of adverbs, conjunctions, prepositions, and auxiliary verbs, placed and repeated according to definite rules. Even obscure or illogical thought can be clearly expressed; indeed, the transparent medium of clear writing is not least beneficial when it reveals the illogical nature of the meaning beneath it.

On the other hand, if a man is to write forcibly, he must (to use a well-known illustration) describe Jerusalem as "sown with salt," not as "captured," and the Jews not as being "subdued" but as "almost exterminated" by Titus. But what does this imply? It implies knowledge, and very often a great deal of knowledge, and it implies also a vivid imagination. The writer must have eyes to see the vivid side of everything, as well as words to describe what he sees. Hence forcible writing, and of course tasteful writing also, is far less a matter of rules than is clear writing; and hence, though forcible writing is exemplified in the exercises, clear writing occupies most of the space devoted to the rules.

Boys who are studying Latin and Greek stand in especial need of help to enable them to write a long English sentence clearly. The periods of Thucydides and Cicero are not easily rendered into our idiom without some knowledge of the links that connect an English sentence.

There is scarcely any better training, rhetorical as well as logical, than the task of construing Thucydides into genuine English; but the flat, vague, long-winded Greek-English and Latin-English imposture that is often tolerated in our examinations and is allowed to pass current for genuine English, diminishes instead of increasing the power that our pupils should possess over their native language. By getting marks at school and college for construing good Greek and Latin into bad English, our pupils systematically unlearn what they may have been allowed to pick up from Milton and from Shakespeare.

I must acknowledge very large obligations to Professor Bain's treatise on "English Composition and Rhetoric," and also to his English Grammar. I have not always been able to agree with Professor Bain as to matters of taste; but I find it difficult to express my admiration for the systematic thoroughness and suggestiveness of his book on Composition. In particular, Professor Bain's rule on the use of "that" and "which" (see ) deserves to be better known. The ambiguity produced by the confusion between these two forms of the Relative is not a mere fiction of pedants; it is practically serious. Take, for instance, the following sentence, which appeared lately in one of our ablest weekly periodicals: "There are a good many Radical members in the House who cannot forgive the Prime Minister for being a Christian." Twenty years hence, who is to say whether the meaning is "and they, i.e....