How to Observe in Archaeology 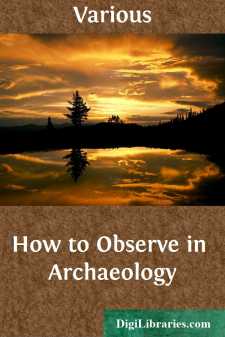 The hints which it is the object of this volume to convey are not meant for experienced archaeologists. They are rather addressed to those who, while anxious to observe and record the antiquities which they may see on their travels, are likely, owing to lack of training, to miss things that may be of importance, or, having observed them, to bring home an imperfect record. It is hoped also that they may catch the attention of some of those who are not interested in the subject, but, coming into possession of antiquities, may unwittingly do incalculable harm by allowing them to be destroyed or dispersed before any record has been made.

Most, if not all, of the countries with which we are concerned, have their Laws of Antiquities. It cannot be too strongly insisted that those laws, even if they might be better than they are, should be obeyed by the traveller. He should familiarize himself with their main provisions, which are summarized in an Appendix. The traveller who makes it his object to loot a country of its antiquities, smuggling objects out of it and disguising the sources from which they are obtained, does a distinct dis–service to archaeological science. Although he may enrich collections, public or private, half or more than half of the scientific value of his acquisitions is destroyed by the fact that their provenance is kept secret or falsely stated. Such action is equivalent to tearing out whole pages from a history and destroying them for ever, for each antiquity, whatever it may be, is in its way a part of history, whether of politics, arts, or civilization. For the same reason anything like unauthorized excavation, especially by unskilled hands, is gravely to be deprecated. To dig an ancient site unskilfully or without keeping a proper record is to obliterate part of a manuscript which no one else will ever be able to read. The tendency of recent legislation is to allow more generous terms in the matter of licences for export to excavators and collectors, and the harsher provisions of some of the existing laws are likely soon to be amended.

Before leaving home, the traveller will be well advised to make inquiries at the museums or at the head–quarters of the archaeological societies which concern themselves specially with the places which he intends to visit. A list of these museums and societies is appended to this section (). It is hardly necessary to warn him that archaeological training cannot be acquired in a few days, and that he will have to buy his experience in various ways; but the more time he can devote to working through the collections in this country, the more useful will be his observations abroad. He will be able to learn what kind of antiquities it is especially desirable to look for, not merely with the object of filling gaps in the public collections, but for the advancement of archaeological knowledge in general.

The object of archaeological travel and excavation is not to collect antiquities so that they may be arranged according to the existing catalogues of museums, but to collect fresh information to amplify and correct what we now know, to make our knowledge of the past more complete and useful....