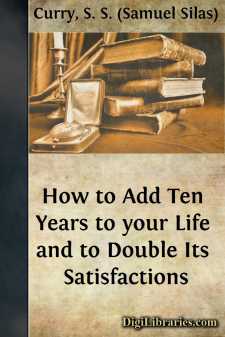 When over eighty years of age, the poet Bryant said that he had added more than ten years to his life by taking a simple exercise while dressing in the morning. Those who knew Bryant and the facts of his life never doubted the truth of this statement.

I have made inquiries lately among men who are eighty years of age, as to their method of waking up. Almost without exception, I find that they have been in the habit of taking simple exercise upon rising and also before retiring.

While studying voice in Paris, over thirty years ago, my teacher was so busy that he had to take me before breakfast at an hour which, to a Parisian, was a very early one.

"Vocal exercises may be more difficult at this time," he said, "but it is the best time. If we can start the day with the right exercise of the voice, the use of it all through the day will be additional right practice."

Later, when I studied with the elder Lamperti in Italy, I requested and secured an early hour in the morning for my lessons.

In teaching I have always urged students to take their exercises the first thing in the morning. Those who have taken my advice have later been grateful for the suggestion.

If my own morning exercises are neglected, I feel as if I had missed a meal or had lost much sleep. I was never what is called physically strong; in fact, physicians have continually prophesied my downfall, yet all my life I have performed about three men's work, and by the use of a few exercises have probably doubled the length of my life.

The subject of human development has always been of great interest to me. I have tried to investigate the various systems of gymnastics in all countries; and, teaching, as I have, about ten thousand the use of the voice and body in expression, I have studied training from a different point of view from that of most men.

I have discovered that the voice cannot be adequately trained without also improving the body; that the improvement of the voice can be doubly accelerated if the body is considered a factor.

I have also found, what is more important, that true exercises are all mental and emotional and not physical, and that both body and voice can never be truly improved except by right thinking and feeling.

I, therefore, long ago came to certain conclusions which are not in accordance with common views. My convictions, however, have been the result, not only of experience, but of wide study and investigation.

It is meant to be a guide for home study and practice. The principles are applicable to everyone. It requires at first, patience, perseverance, and resolution at that moment in the day when we are most liable to be indifferent and negative, if not irresolute and discouraged. Whoever resolutely undertakes to obey the suggestions will never regret doing so. In fact, it is not too much to claim that he will not only lengthen his life but double its satisfactions.

Every reader of the book is requested to become a member of the Morning League, and whosoever does so and makes a report or writes to me fully about special weaknesses, habits, "besetting sins," or conditions will receive a letter of suggestions.

This book and its companion, "The Smile," are published as a part of the great work undertaken by the friends of the School of Expression; the net receipts from the sale will go to the Endowment Fund of the institution.

HOW TO ADD TEN YEARS TO YOUR LIFE I SIGNIFICANCE OF MORNING "The year's at the springAnd day's at the morn;Morning's at seven;The hill-side's dew-pearled;The lark's on the wing;The snail's on the thorn;God's in his heaven—All's right with the world!" Song from "Pippa Passes"Robert Browning

Browning's "Pippa Passes" is a parable or allegory of human life.

Though called a drama by its author, it embodies, like all plays of the highest type, other than dramatic elements. In exalted poetry the allegoric, lyric, epic and dramatic seem to be blended. An effort to separate them often seems academic and mechanical....