How the Flag Became Old Glory 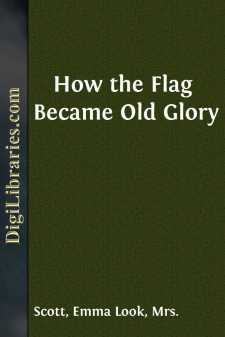 THE FLAG GOES BY

HATS off!Along the street there comesA blare of bugles, a ruffle of drums,A flash of color beneath the sky;Hats off!The flag is passing by!

Blue and crimson and white it shines,Over the steel-tipped ordered lines,Hats off!The colors before us fly!But more than the flag is passing by. Sea-fights and land-fights, grim and great,Fought to make and to save the State.Weary marches and sinking ships;Cheers of victory on dying lips. Days of plenty and years of peace;March of a strong land’s swift increase;Equal justice, right and law,Stately honor and reverent awe; Sign of a Nation, great and strongTo ward her people from foreign wrong:Pride and glory and honor—allLive in the colors to stand or fall. Hats off!Along the street there comesA blare of bugles, a ruffle of drums,And loyal hearts are beating high:Hats off!The flag is passing by!

WHILE every American citizen recognizes the significance of the term “Old Glory” as applied to the national flag, when and where and by whom the nation’s emblem was christened with this endearing and enduring sobriquet is a matter of historic interest less understood.

In the early epoch-making period of the nation’s history William Driver, a lad of twelve years, native of Salem, Mass., begged of his mother permission to go to sea. With her consent he shipped as cabin boy on the sailing vessel China, bound for Leghorn, a voyage of eighteen months.

On this first voyage the courageous spirit of the youth manifested itself in a determination to disprove the words of the ship’s owner, made to him at the beginning of the voyage: “All boys on their first voyage eat more than they earn.”

In appreciation of the mettle shown by the lad, the owner presented him, upon the return from the cruise, with twenty-eight dollars in silver, besides his wages of five dollars per month. He carried the money to his mother, who wisely admonished him to do the very best he could under every circumstance, a charge he never forgot.

His intrepid spirit brought the youthful mariner rapid and deserved promotion. His eighteenth year found him master of a vessel. Those were hazardous days upon the sea, and more than once his ship was subjected to indignity and outrage incident to seafaring of that period. But throughout a long career as master of a merchantman the Stars and Stripes was never lowered from the masthead nor sullied by defeat or by dishonor.

The sailor, of all men, venerates his nation’s flag. To him it is the visible and tangible token of the government he serves, and in it he beholds all the government’s strength and virtue. To William Driver, therefore, the Stars and Stripes typified the glory of the land and of the sea. And seeing his nation’s symbol float dauntless and triumphant above stress of every encounter and happening upon the deep enkindled the inherent love in his heart for it to enthusiastic ardor, and in thought he called the flag “Old Glory.”

A simple incident, but fraught with unread meaning, gave the name into the nation’s keep, albeit its formal christening and national adoption was not to come until the soil beneath its folds should be deep-dyed with the blood of conflict between the land’s own countrymen.

In 1831, as master of the brig Charles Daggett, about to set sail for a voyage around the world from Salem, Mass., Captain Driver was presented by the citizens with a large bunting flag in commendation of his services upon the sea and his well-known love for his country’s emblem....