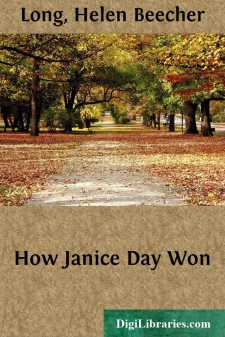 CHAPTER I TROUBLE FROM NEAR AND FAR

At the corner of High Street, where the lane led back to the stables of the Lake View Inn, Janice Day stopped suddenly, startled by an eruption of sound from around an elbow of the lane—a volley of voices, cat-calls, and ear-splitting whistles which shattered Polktown's usual afternoon somnolence.

One youthful imitator expelled a laugh like the bleating of a goat:

Another shout of laugher and a second boy exclaimed:

All the voices seemed those of boys; but this was an hour when most of the town lads were supposed to be under the more or less eagle eye of Mr. Nelson Haley, the principal of the Polktown school. Janice attended the Middletown Seminary, and this chanced to be a holiday at that institution. She stood anxiously on the corner now to see if her cousin, Marty, was one of this crowd of noisy fellows.

With stumbling feet, and with the half dozen laughing, mocking boys tailing him, a bewhiskered, rough-looking, shabby man came into sight. His appearance on the pleasant main thoroughfare of the little lakeside town quite spoiled the prospect.

Before, it had been a lovely scene. Young Spring, garbed only in the tender greens of the quickened earth and the swelling buds of maple and lilac, had accompanied Janice Day down Hillside Avenue into High Street from the old Day house where she lived with her Uncle Jason, her Aunt 'Mira, and Marty. All the neighbors had seen Janice and had smiled at her; and those whose eyes were anointed by Romance saw Spring dancing by the young girl's side.

Her eyes sparkled; there was a rose in either cheek; her trim figure in the brown frock, well-built walking shoes of tan, and pretty toque, was an effective bit of life in the picture, the background of which was the sloping street to the steamboat dock and the beautiful, blue, dancing waters of the lake beyond.

An intoxicated man on the streets of Polktown during the three years of Janice Day's sojourn here was almost unknown. There had been no demand for the sale of liquor in the town until Lem Parraday, proprietor of the Lake View Inn, applied to the Town Council for a bar license.

The request had been granted without much opposition. Mr. Cross Moore, President of the Council, held a large mortgage on the Parraday premises, and it was whispered that this fact aided in putting the license through in so quiet a way.

It was agreed that Polktown was growing. The "boom" had started some months before. Already the sparkling waters of the lake were plied by a new Constance Colfax, and the C. V. Railroad was rapidly completing its branch which was to connect Polktown with the Eastern seaboard.

Whereas in the past a half dozen traveling men might visit the town in a week and put up at the Inn, there had been through this Winter a considerable stream of visitors. And it was expected that the Inn, as well as every house that took boarders in the town, would be well patronized during the coming Summer....