Houses and House-Life of the American Aborigines 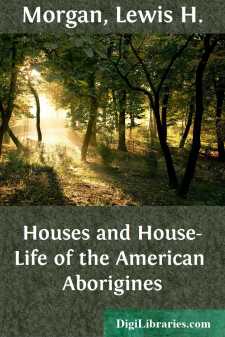 The following work substantially formed the Fifth Part of the original manuscript of "Ancient Society," under the title "Growth of the Idea of House Architecture." As the manuscript exceeded the limits of a single volume, this portion (Part V) was removed, and having then no intention to publish it separately, the greater part of it found its way into print in detached articles. A summary was given to Johnson's New Universal Cyclopedia in the article on the "Architecture of the American Aborigines." The chapter on the "Houses of the Aztecs" formed the basis of the article entitled "Montezuma's Dinner," published in the North American Review, in April, 1876. Another chapter, that on the "Houses of the Mound Builders," was published in the same Review in July, 1876. Finally, the present year, at the request of the executive committee of the "Archaeological Institute of America," at Cambridge, I prepared from the same materials an article entitled "A Study of the Houses and House Life of the Indian Tribes," with a scheme for the exploration of the ruins in New Mexico, Arizona, the San Juan region, Yucatan, and Central America.

With some additions and reductions the facts are now presented in their original form, and as they will now have a wider distribution than the articles named have had, they will be new to most of my readers. The facts and suggestions made will also have the advantage of being presented in their proper connection. Thus additional strength is given to the argument as a whole. All the forms of this architecture sprang from a common mind, and exhibit, as a consequence, different stages of development of the same conceptions, operating upon similar necessities. They also represent these several conditions of Indian life with reasonable completeness. Their houses will be seen to form one system of works, from the Long House of the Iroquois to the Joint Tenement houses of adobe and of stone in New Mexico, Yucatan, Chiapas, and Guatemala, with such diversities as the different degrees of advancement of these several tribes would naturally produce. Studied as one system, springing from a common experience, and similar wants, and under institutions of the same general character, they are seen to indicate a plan of life at once novel, original, and distinctive.

The principal fact, which all these structures alike show, from the smallest to the greatest, is that the family through these stages of progress was too weak an organization to face alone the struggle of life, and sought a shelter for itself in large households composed of several families. The house for a single family was exceptional throughout aboriginal America, while the house large enough to accommodate several families was the rule. Moreover, they were occupied as joint tenement houses. There was also a tendency to form these households on the principle of gentile kin, the mothers with their children being of the same gens or clan.

If we enter upon the great problem of Indian life with a determination to make it intelligible, their house life and domestic institutions must furnish the key to its explanation....