Hortus Vitae Essays on the Gardening of Life 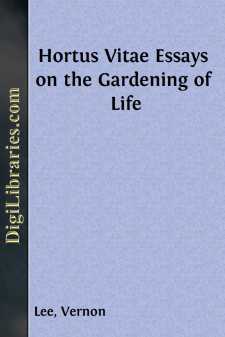 The first copy of this little book was, of course, to have been for Gabrielle Delzant. I am fulfilling her wish, I think, in giving it, instead, to you, who were her oldest friend; as I, alas! had time to be only her latest.

She had read nearly all these essays; and, during those weeks of her illness which I spent last autumn in Gascony, she had made me rewrite several among them. She wanted to learn to read English aloud, and it amused her and delighted me that she should do so on my writings. Her French pronunciation gave an odd grace to the sentences; the little hesitation spaced and accentuated their meaning; and I liked what I had written when she read it. The afternoons at Paraÿs which we spent together in this way! Prints of Mère Angélique and Ces Messieurs de Port Royal watching over us in her spacious bedroom, brown and yet light like the library it had become; and among those Jansenist worthies, the Turin Pallas Athena, with a sprig of green box as an offering from our friend. Yes; what I had written seemed good when read by her. And then there were the words which had to be looked out in the dictionary, bringing discussions on all manner of subjects, and wonderful romantic stories, like the "Golden Legend," about grandparents and servants and neighbours, giving me time to rearrange the cushions and to settle the fur over her feet. And the other words, hard to pronounce (she must always invert, from sheer anxiety, the English th's and s's); I had to say them first, and once more, and yet again. And we laughed, and I kissed her beloved patient face and her dear young white hair. I don't think it ever occurred to tell her my intention of putting her name on this volume—it went without saying. And besides, had not everything I could do or be of good belonged to her during the eighteen months we had been friends?

There was another reason, however, why this book more particularly should have been hers; and having been hers, dear Madame Blanc, yours. Do you remember telling me how, years ago, and in a terrible moment of your experience, she had surprised you, herself still so young, by a remark which had sunk deep into your mind and had very greatly helped you? "We must," you told me she had said, "be prepared to begin life many times afresh." Now that is the thought, though never clearly expressed, which runs through these essays. And the essential goodness and fruitfulness of life, its worthiness to be lived over and over again, had come home to me more and more with the knowledge and the love of her who had made my own life so far happier and more significant. So that my endeavour to enumerate some of the unnoticed gifts and deepest consolations of life has come to be connected in my mind with this creature who consoled so many and gave herself, with such absolute gift of loving-kindness or gratitude, to all people and all things that deserved it.

That life is worthy to be lived well, with fortitude, tenderness, and a certain reserved pride and humility, was indeed the essential, unspoken tenet of Gabrielle Delzant's religion, into which there entered, not merely the teachings of Stoics and Jansenists, but the traditional gaiety and gallant bearing of the little southern French nobles from whom she was descended....