Hortus Inclusus Messages from the Wood to the Garden, Sent in Happy Days to the Sister Ladies of the Thwaite, Coniston 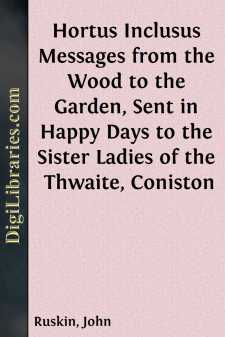 The ladies to whom these letters were written have been, throughout their brightly tranquil lives, at once sources and loadstones of all good to the village in which they had their home, and to all loving people who cared for the village and its vale and secluded lake, and whatever remained in them or around of the former peace, beauty, and pride of English Shepherd Land.

Sources they have been of good, like one of its mountain springs, ever to be found at need. They did not travel; they did not go up to London in its season; they did not receive idle visitors to jar or waste their leisure in the waning year. The poor and the sick could find them always; or rather, they watched for and prevented all poverty and pain that care or tenderness could relieve or heal. Loadstones they were, as steadily bringing the light of gentle and wise souls about them as the crest of their guardian mountain gives pause to the morning clouds: in themselves, they were types of perfect womanhood in its constant happiness, queens alike of their own hearts and of a Paradise in which they knew the names and sympathized with the spirits of every living creature that God had made to play therein, or to blossom in its sunshine or shade.

They had lost their dearly-loved younger sister, Margaret, before I knew them. Mary and Susie, alike in benevolence, serenity, and practical judgment, were yet widely different, nay, almost contrary, in tone and impulse of intellect. Both of them capable of understanding whatever women should know, the elder was yet chiefly interested in the course of immediate English business, policy, and progressive science, while Susie lived an aerial and enchanted life, [Pg vi] possessing all the highest joys of imagination, while she yielded to none of its deceits, sicknesses, or errors. She saw, and felt, and believed all good, as it had ever been, and was to be, in the reality and eternity of its goodness, with the acceptance and the hope of a child; the least things were treasures to her, and her moments fuller of joy than some people's days.

What she had been to me, in the days and years when other friendship has been failing, and others' "loving, mere folly," the reader will enough see from these letters, written certainly for her only, but from which she has permitted my Master of the Rural Industries at Loughrigg, Albert Fleming, to choose what he thinks, among the tendrils of clinging thought, and mossy cups for dew in the Garden of Herbs where Love is, may be trusted to the memorial sympathy of the readers of "Frondes Agrestes."

Often during those visits to the Thwaite which have grown to be the best-spent hours of my later years, I have urged my dear friend Miss Beever to open to the larger world the pleasant paths of this her Garden Inclosed. The inner circle of her friends knew that she had a goodly store of Mr. Ruskin's letters, extending over many years....