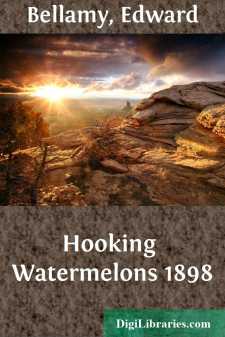 The train slackened, a brakeman thrust his head in at the door and shouted "Bah,"—a mysterious formality observed on American trains as they enter towns,—and an elderly lady, two drummers, and a young man with a satchel got out, followed by the languid envy of the other passengers, who had longer or shorter penances of heat and dust before them. The train got under way again, while the knot of loafers about the station proceeded to eye the arrivals as judicially as if they were a committee of safety to protect the village from invasion by doubtful characters. The old lady, apparently laboring under some such impression, regarded them deferentially, as nervous travelers on arriving in strange places generally do regard everybody who seems to feel at home. The drummers briskly disappeared down the main street, each anxious to anticipate the other at the stores. The young man with the satchel, however, did not get away till he had shaken hands and exchanged a few good-natured inquiries with one of the loungers.

"Who's that, Bill?" asked one of the group, staring after the retreating figure with lazy curiosity.

"Why, did n't you know him? Thought everybody knew him. That's Arthur Steele," replied the one who had shaken hands, in a tone of cordiality indicating that his politeness had left a pleasant impression on his mind, as Arthur Steele's politeness generally did.

"Who is he, anyhow?" pursued the other.

"Why, he 's a Fairfield boy" (the brakeman pronounced it "Bah"), "born and brought up here. His folks allers lived right next to mine, and now he's doin' a rushin' lawyer trade down New York, and I expect he's just rakin' the stamps. Did yer see that diamond pin he wore?"

"S'pose it's genooine?" asked a third loafer, with interest.

"Course it was. I tell you he's on the make, and don't you forgit it. Some fellers allers has luck. Many 's the time he 'n' I 've been in swim-min' and hookin' apples together when we wuz little chaps," pursued Bill, in a tone implying a mild reproach at the deceitfulness of an analogy that after such fair promise in early life had failed to complete itself in their later fortunes.

"Why, darn it all, you know him, Jim," he continued, dropping the tone of pensive reminiscence into which he had momentarily allowed himself to fall. "That pretty gal that sings in the Baptis' choir is his sister."

After a space of silent rumination and jerking of peanut shells upon the track, the group broke up its session, and adjourned by tacit understanding till the next train was due.

Arthur Steele was half an hour in getting to his father's house, because everybody he met on the street insisted on shaking hands with him. Everybody in Fairfield had known him since he was a boy, and had seen him grow up, and all were proud of him as a credit to the village and one of its most successful representatives in the big outside world. The young man had sense and sentiment enough to feel that the place he held in the esteem of his native community was a thing to feel more just pride in than any station he could win in the city, and as he walked along hand-shaking with old friends on this side and that, it was about his idea of a triumphal entry.

There was the dear old house, and as he saw it his memory of it started out vividly in his mind as if to attest how faithfully it had kept each detail. It never would come out so clearly at times when he was far away and needed its comfort. He opened the door softly. The sitting-room was empty, and darkened to keep out the heat and flies. The latched door stood open, and, hearing voices, he tiptoed across the floor with a guileful smile and, leaning through the doorway, saw his mother and sister sitting by the cool, lilac-shaded window, picking over currants for tea, and talking tranquilly. Being a provident young man, he paused a minute to let the pretty, peaceful scene impress itself upon his mind, to be remembered afterward for the cheer of bleak boarding-house Sunday afternoons. Then there was a sudden glancing up, a cry of joyful consternation, and the pan of currants rolled from Amy's lap like a broken necklace of rubies across the uncarpeted floor, while Arthur held mother and sister in a double embrace....