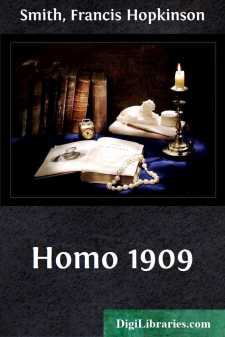 Dinner was over, and Mme. Constantin and her guests were seated under the lighted candles in her cosey salon.

With the serving of the coffee and cigarettes, pillows had been adjusted to bare shoulders, stools moved under slippered feet, and easy lounges pushed nearer the fire. Greenough, his long body aslant, his head on the edge of a chair, his feet on the hearth rug, was blowing rings to the ceiling. Bayard, the African explorer, and the young Russian Secretary, Ivan Petrovski, had each the end of a long sofa, with pretty Mme. Petrovski and old Baron Sleyde between them, while Mme. Constantin lay nestled like a kitten among the big and little cushions of a divan.

The dinner had been a merry one, with every brain at its best; this restful silence was but another luxury. Only the Baron rattled on. A duel of unusual ferocity had startled Paris, and the old fellow knew its every detail. Mme. Petrovski was listening in a languid way:

"Dead, isn't he?" she asked in an indifferent tone, as being the better way to change the subject. Duels did not interest the young bride.

"No," answered the Baron, flicking the ashes from his cigarette—"going to get well, so Mercier, who operated, told a friend of mine to-day."

"Where did they fight?" she asked, as she took a fresh cigarette from her case. "Ivan told me, but I forgot."

"At Surenne, above the bridge. You know the row of trees by the water; we walked there the day we dined at the Cycle."

"Both of them fools!" cried the Russian from the depths of his seat. "La Clou wasn't worth it—she's getting fat."

Greenough drew his long legs back from the fender and, looking toward the young Secretary, said in a decided tone:—

"I don't agree with you, Ivan. Served the beggar right; the only pity is that he's going to get well."

"But she wasn't his wife," remarked Mme. Petrovski with increased interest, as she lighted her cigarette.

"No matter, he loved her," returned the Englishman, straightening in his seat and squaring his broad shoulders.

"And so did the poor devil whom Mercier sewed up," laughed the old Baron, his eyes twinkling.

Mme. Constantin raised her blonde head from the edge of the divan.

"Is there any wrong, you dear Greenough, you would forgive where a woman is concerned?"

"Plenty. Any wrong that you would commit, my dear lady, for instance; but not the kind the Baron refers to."

"But why do you Englishmen always insist on an eye for an eye and a tooth for a tooth? Can't you make some allowance for the weakness of human nature?" she asked, smiling.

"But why only Englishmen?" demanded Greenough. "All nationalities feel alike where a man's honor and the honor of his home are concerned. It is only the punishment that differs. The Turk, for instance, bowstrings you or tries to, for peeping under his wife's veil; the American shoots you at sight for speaking slightingly of his daughter. Both are right in a way. I am not brutal; I am only just, and I tell you there is only one way of treating a man who has robbed you dishonestly of the woman you love, and that is to finish him so completely that the first man called in will be the undertaker—not the surgeon....