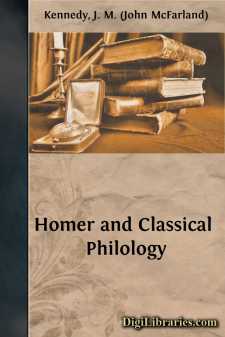 At the present day no clear and consistent opinion seems to be held regarding Classical Philology. We are conscious of this in the circles of the learned just as much as among the followers of that science itself. The cause of this lies in its many-sided character, in the lack of an abstract unity, and in the inorganic aggregation of heterogeneous scientific activities which are connected with one another only by the name "Philology." It must be freely admitted that philology is to some extent borrowed from several other sciences, and is mixed together like a magic potion from the most outlandish liquors, ores, and bones. It may even be added that it likewise conceals within itself an artistic element, one which, on æsthetic and ethical grounds, may be called imperatival—an element that acts in opposition to its purely scientific behaviour. Philology is composed of history just as much as of natural science or æsthetics: history, in so far as it endeavours to comprehend the manifestations of the individualities of peoples in ever new images, and the prevailing law in the disappearance of phenomena; natural science, in so far as it strives to fathom the deepest instinct of man, that of speech; æsthetics, finally, because from various antiquities at our disposal it endeavours to pick out the so-called "classical" antiquity, with the view and pretension of excavating the ideal world buried under it, and to hold up to the present the mirror of the classical and everlasting standards. That these wholly different scientific and æsthetico-ethical impulses have been associated under a common name, a kind of sham monarchy, is shown especially by the fact that philology at every period from its origin onwards was at the same time pedagogical. From the standpoint of the pedagogue, a choice was offered of those elements which were of the greatest educational value; and thus that science, or at least that scientific aim, which we call philology, gradually developed out of the practical calling originated by the exigencies of that science itself.

These philological aims were pursued sometimes with greater ardour and sometimes with less, in accordance with the degree of culture and the development of the taste of a particular period; but, on the other hand, the followers of this science are in the habit of regarding the aims which correspond to their several abilities as the aims of philology; whence it comes about that the estimation of philology in public opinion depends upon the weight of the personalities of the philologists!

At the present time—that is to say, in a period which has seen men distinguished in almost every department of philology—a general uncertainty of judgment has increased more and more, and likewise a general relaxation of interest and participation in philological problems. Such an undecided and imperfect state of public opinion is damaging to a science in that its hidden and open enemies can work with much better prospects of success. And philology has a great many such enemies. Where do we not meet with them, these mockers, always ready to aim a blow at the philological "moles," the animals that practise dust-eating ex professo, and that grub up and eat for the eleventh time what they have already eaten ten times before. For opponents of this sort, however, philology is merely a useless, harmless, and inoffensive pastime, an object of laughter and not of hate. But, on the other hand, there is a boundless and infuriated hatred of philology wherever an ideal, as such, is feared, where the modern man falls down to worship himself, and where Hellenism is looked upon as a superseded and hence very insignificant point of view. Against these enemies, we philologists must always count upon the assistance of artists and men of artistic minds; for they alone can judge how the sword of barbarism sweeps over the head of every one who loses sight of the unutterable simplicity and noble dignity of the Hellene; and how no progress in commerce or technical industries, however brilliant, no school regulations, no political education of the masses, however widespread and complete, can protect us from the curse of ridiculous and barbaric offences against good taste, or from annihilation by the Gorgon head of the classicist.

Whilst philology as a whole is looked on with jealous eyes by these two classes of opponents, there are numerous and varied hostilities in other directions of philology; philologists themselves are quarrelling with one another; internal dissensions are caused by useless disputes about precedence and mutual jealousies, but especially by the differences—even enmities—comprised in the name of philology, which are not, however, by any means naturally harmonised instincts.

Science has this in common with art, that the most ordinary, everyday thing appears to it as something entirely new and attractive, as if metamorphosed by witchcraft and now seen for the first time. Life is worth living, says art, the beautiful temptress; life is worth knowing, says science....