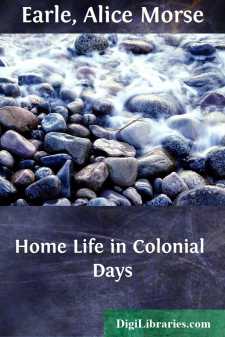 CHAPTER IHOMES OF THE COLONISTS

When the first settlers landed on American shores, the difficulties in finding or making shelter must have seemed ironical as well as almost unbearable. The colonists found a land magnificent with forest trees of every size and variety, but they had no sawmills, and few saws to cut boards; there was plenty of clay and ample limestone on every side, yet they could have no brick and no mortar; grand boulders of granite and rock were everywhere, yet there was not a single facility for cutting, drawing, or using stone. These homeless men, so sorely in need of immediate shelter, were baffled by pioneer conditions, and had to turn to many poor expedients, and be satisfied with rude covering. In Pennsylvania, New York, Massachusetts, and, possibly, other states, some reverted to an ancient form of shelter: they became cave-dwellers; caves were dug in the side of a hill, and lived in till the settlers could have time to chop down and cut up trees for log houses. Cornelis Van Tienhoven, Secretary of the Province of New Netherland, gives a description of these cave-dwellings, and says that "the wealthy and principal men in New England lived in this fashion for two reasons: first, not to waste time building; second, not to discourage poorer laboring people." It is to be doubted whether wealthy men ever lived in them in New England, but Johnson, in his Wonder-working Providence, written in 1645, tells of the occasional use of these "smoaky homes." They were speedily abandoned, and no records remain of permanent cave-homes in New England. In Pennsylvania caves were used by newcomers as homes for a long time, certainly half a century. They generally were formed by digging into the ground about four feet in depth on the banks or low cliffs near the river front. The walls were then built up of sods or earth laid on poles or brush; thus half only of the chamber was really under ground. If dug into a side hill, the earth formed at least two walls. The roofs were layers of tree limbs covered over with sod, or bark, or rushes and bark. The chimneys were laid of cobblestone or sticks of wood mortared with clay and grass. The settlers were thankful even for these poor shelters, and declared that they found them comfortable. By 1685 many families were still living in caves in Pennsylvania, for the Governor's Council then ordered the caves to be destroyed and filled in. Sometimes the settler used the cave for a cellar for the wooden house which he built over it.

These cave-dwellings were perhaps the poorest houses ever known by any Americans, yet pioneers, or poor, or degraded folk have used them for homes in America until far more recent days. In one of these miserable habitations of earth and sod in the town of Rutland, Massachusetts, were passed some of the early years of the girlhood of Madame Jumel, whose beautiful house on Washington Heights, New York, still stands to show the contrasts that can come in a single life.

The homes of the Indians were copied by the English, being ready adaptations of natural and plentiful resources. Wigwams in the South were of plaited rush or grass mats; of deerskins pinned on a frame; of tree boughs rudely piled into a cover, and in the far South, of layers of palmetto leaves. In the mild climate of the Middle and Southern states a "half-faced camp," of the Indian form, with one open side, which served for windows and door, and where the fire was built, made a good temporary home. In such for a time, in his youth, lived Abraham Lincoln. Bark wigwams were the most easily made of all; they could be quickly pinned together on a light frame. In 1626 there were thirty home-buildings of Europeans on the island of Manhattan, now New York, and all but one of them were of bark.

Though the settler had no sawmills, brick kilns, or stone-cutters, he had one noble friend,—a firm rock to stand upon,—his broad-axe....