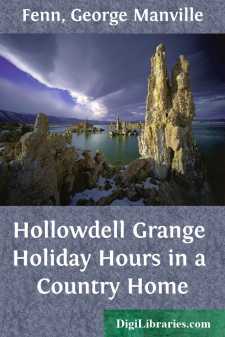 A Fish out of Water.

It was such a fine hot Midsummer day at Hollowdell station, that the porter had grown tired of teasing the truck-driver’s dog, and fallen fast asleep—an example which the dog had tried to follow, but could not, because there was only one shady spot within the station-gates, and that had been taken possession of by the porter; so the poor dog had tried first one place, and then another, but they were all so hot and stifling, and the flies kept buzzing about him so teasingly, that he grew quite cross, and barked and snapped so at the tiresome insects, that at last he woke Jem Barnes, the porter, who got up, stretched himself, yawned very rudely and loudly, and then, looking in at the station-clock, he saw that the 2:30 train from London was nearly due, so he made up his mind not to go to sleep again until it had passed.

It was a hot day—so hot that the great black tarpaulins over the goods-waggons were quite soft, and came off all black upon Jem Barnes’s hands. The air down the road seemed to quiver and dance over the white chalky dust; while all the leaves upon the trees, and the grass in the meadows, drooped beneath the heat of the sun. As to the river, it shone like a band of silver as it wound in and out, and here and there; and when you looked you could see the reflection of the great dragon-flies as they flitted and raced about over the glassy surface. The reeds on the bank were quite motionless; while, out in the middle, the fat old chub could be seen basking in the sunshine, wagging their great broad fantails in the sluggish stream, too lazy even to snap up the flies that passed over their heads. All along the shallows the roach and dace lay in shoals, flashing about, every now and then, in the transparent water like gleams of silver light. Down in the meadows, where the ponds were, and the shady trees grew, the cows were so hot that they stood up to their knees in the muddy water, chewing their grass with half-shut eyes, and whisking their long tails about to keep the flies at a distance. But it was of no use to whisk, for every now and then a nasty, spiteful, hungry fly would get on some poor cow’s back, creep beneath the hair, and force its horny trunk into the skin so sharply, that the poor animal would burst out into a doleful lowing, and, sticking its tail up, go galloping and plunging through the meadow in such a clumsy way as only a cow can display. A few fields off the grass was being cut, and the sharp scythes of the mowers went tearing through the tall, rich, green crop, and laid it low in long rows as the men, with their regular strokes, went down the long meadows. Every now and then, too, they would make the wood-side re-echo with the musical ringing sound of the scythes, as the gritty rubbers glided over the keen edges of the bright tools.

Hot, hot, hot!—how the sun glowed in the bright blue sky! and how the down train puffed and panted, while the heat of the weather made even the steam from the funnel transparent as it streamed backwards over the engine’s green back!...