Hochelagans and Mohawks A Link in Iroquois History 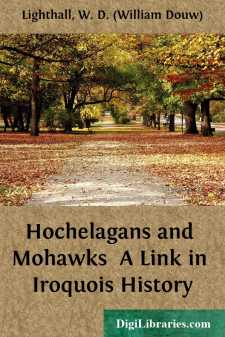 The exact origin and first history of the race whose energy so stunted the growth of early Canada and made the cause of France in America impossible, have long been wrapped in mystery. In the days of the first white settlements the Iroquois are found leagued as the Five Nations in their familiar territory from the Mohawk River westward. Whence they came thither has always been a disputed question. The early Jesuits agreed that they were an off-shoot of the Huron race whose strongholds were thickly sown on the eastern shore of Lake Huron, but the Jesuits were not clear as to their course of migration from that region, it being merely remarked that they had once possessed some settlements on the St. Lawrence below Montreal, with the apparent inference that they had arrived at these by way of Lake Champlain. Later writers have drawn the same inference from the mention made to Cartier by the Hochelagans of certain enemies from the south whose name and direction had a likeness to later Iroquois conditions. Charlevoix was persuaded by persons who he considered had sufficiently studied the subject that their seats before they left for the country of the Five Nations were about Montreal. The late Horatio Hale put the more recently current and widely accepted form of this view as follows: "The clear and positive traditions of all the surviving tribes, Hurons, Iroquois and Tuscaroras, point to the Lower St. Lawrence as the earliest known abode of their stock. Here the first explorer, Cartier, found Indians of this stock at Hochelaga and Stadacona, now the sites of Montreal and Quebec. Centuries before his time, according to the native tradition, the ancestors of the Huron-Iroquois family had dwelt in this locality, or still further east and nearer to the river's mouth. As the numbers increased, dissensions arose. The hive swarmed and band after band moved off to the west and south."

"Their first station on the south side of the lakes was at the mouth of the Oswego River. Advancing to the southeast, the emigrants struck the River Hudson" and thence the ocean. Most of them returned to the Mohawk River, where the Huron speech was altered to Mohawk. In Iroquois tradition and in the constitution of their League the Canienga (Mohawk) nation ranks as 'eldest brother' of the family. A comparison of the dialects proves this tradition to be well founded. The Canienga language approaches nearest to the Huron, and is undoubtedly the source from which all the other Iroquois dialects are derived. Cusick states positively that the other families, as he styles them, of the Iroquois household, leaving the Mohawks in their original abode, proceeded step by step to the westward. The Oneidas halted at their creek, the Onondagas at their mountain, the Cayugas at their lake and the Senecas or Sonontowans, the great hill people, at a lofty eminence which rises south of the Canandaigua Lake." Hale appeals also to the Wyandot tradition recorded by Peter Dooyentate Clark, that the Huron originally lived about Montreal near the "Senecas," until war broke out and drove them westward....