History of the United States

by Charles A. (Charles Austin) Beard 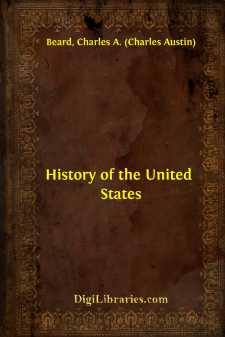 CHAPTER I THE GREAT MIGRATION TO AMERICA

The tide of migration that set in toward the shores of North America during the early years of the seventeenth century was but one phase in the restless and eternal movement of mankind upon the surface of the earth. The ancient Greeks flung out their colonies in every direction, westward as far as Gaul, across the Mediterranean, and eastward into Asia Minor, perhaps to the very confines of India. The Romans, supported by their armies and their government, spread their dominion beyond the narrow lands of Italy until it stretched from the heather of Scotland to the sands of Arabia. The Teutonic tribes, from their home beyond the Danube and the Rhine, poured into the empire of the Cæsars and made the beginnings of modern Europe. Of this great sweep of races and empires the settlement of America was merely a part. And it was, moreover, only one aspect of the expansion which finally carried the peoples, the institutions, and the trade of Europe to the very ends of the earth.

In one vital point, it must be noted, American colonization differed from that of the ancients. The Greeks usually carried with them affection for the government they left behind and sacred fire from the altar of the parent city; but thousands of the immigrants who came to America disliked the state and disowned the church of the mother country. They established compacts of government for themselves and set up altars of their own. They sought not only new soil to till but also political and religious liberty for themselves and their children.

The Agencies of American Colonization

It was no light matter for the English to cross three thousand miles of water and found homes in the American wilderness at the opening of the seventeenth century. Ships, tools, and supplies called for huge outlays of money. Stores had to be furnished in quantities sufficient to sustain the life of the settlers until they could gather harvests of their own. Artisans and laborers of skill and industry had to be induced to risk the hazards of the new world. Soldiers were required for defense and mariners for the exploration of inland waters. Leaders of good judgment, adept in managing men, had to be discovered. Altogether such an enterprise demanded capital larger than the ordinary merchant or gentleman could amass and involved risks more imminent than he dared to assume. Though in later days, after initial tests had been made, wealthy proprietors were able to establish colonies on their own account, it was the corporation that furnished the capital and leadership in the beginning.

The Trading Company.—English pioneers in exploration found an instrument for colonization in companies of merchant adventurers, which had long been employed in carrying on commerce with foreign countries. Such a corporation was composed of many persons of different ranks of society—noblemen, merchants, and gentlemen—who banded together for a particular undertaking, each contributing a sum of money and sharing in the profits of the venture....