History of the Nineteenth Army Corps

by Richard B. (Richard Biddle) Irwin 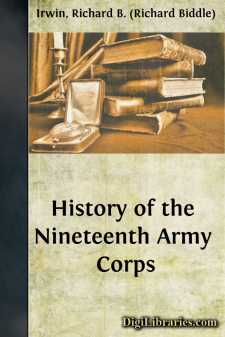 The history of the Nineteenth Army Corps, like that of by far the greater number of the organizations of like character, in which were arrayed the great armies of volunteers that took up arms to maintain the Union, is properly the history of all the troops that at any time belonged to the corps or served within its geographical limits.

To be complete, then, the narrative my comrades have asked me to write must go back to the earliest service of these troops, at a period before the corps itself was formally established, and must continue on past the time when the earlier territorial organization became merged or lost and the main body of the corps was sent into the Shenandoah, down to the peace, and the final muster of the last regiment.

If hitherto less known and thus less considered than the proud record of those great corps of the Armies of the Potomac, of the Tennessee, and of the Cumberland, on whom in the fortune of war fell the heat and burthen of so many pitched battles, whose colors bear the names of so many decisive victories, yet the story of the Nineteenth Army Corps is one whose simple facts suffice for all that need to told or claimed of valor, of achievement, of sacrifice, or of patient endurance. I shall, therefore, attempt neither eulogy nor apology, nor shall I feel called upon to undertake to criticise the actions or the failures of the living or the dead, save where such criticism may prove to be an essential part of the narrative. From the brows of other soldiers, no one of us could ever wish to pluck the wreaths so dearly won, so honorably worn; yet, since the laurel grows wild on every hill-side in this favored land, we may without trespass be permitted to gather a single spray or two to decorate the sacred places where beneath the cypresses and the magnolias of the lowlands of Louisiana, or under the green turf among the mountains of Virginia, reposes all that was mortal of so many thousands of our brave and beloved comrades.

The opening of the Mississippi and the capture of New Orleans formed important parts of the first comprehensive plan of campaign, conceived and proposed by Lieutenant-General Scott soon after the outbreak of the war. When McClellan was called to Washington to command the Army of the Potomac, one of his earliest communications to the President set forth in general terms his plans for the suppression of the Rebellion. Of these plans, also, the capture of New Orleans formed an integral and important part. Both Scott and McClellan contemplated a movement down the river by a strong column. However nothing had been done by either toward carrying out this project, when, in September, 1861, the Navy Department took up the idea of an attack on New Orleans from the sea.

At the time of the secession of Louisiana, New Orleans was not only the first city in wealth, population, and importance in the seceded States, but the sixth in all the Union. With a population of nearly 170,000 souls, she carried on an export trade larger than that of any other port in the country, and enjoyed a commerce in magnitude and profit second only to that of New York. The year just ended had witnessed the production of the largest crop of cotton ever grown in America, fully two fifths of which passed through the presses and paid toll to the factors of New Orleans....