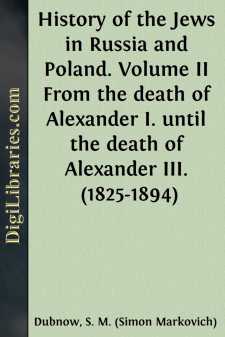 CHAPTER XIII THE MILITARY DESPOTISM OF NICHOLAS I. 1. MILITARY SERVICE AS A MEANS OF DE-JUDAIZATION

The era of Nicholas I. was typically inaugurated by the bloody suppression of the Decembrists and their constitutional demands, [1] proving as it subsequently did one continuous triumph of military despotism over the liberal movements of the age. As for the emancipation of the Jews, it was entirely unthinkable in an empire which had become Europe's bulwark against the inroads of revolutionary or even moderately liberal tendencies. The new despotic regime, overflowing with aggressive energy, was bound to create, after its likeness, a novel method of dealing with the Jewish problem. Such a method was contrived by the iron will of the Russian autocrat.

Nicholas I., who was originally intended for a military career, was placed on the Russian throne by a whim of fate.[1] Prior to his accession, Nicholas had shown no interest in the Jewish problem. The Jewish masses had flitted across his vision but once—in 1816—when, still a young man, he traveled through Russia for his education. The impression produced upon him by this strange people is recorded by the then grand duke in his diary in a manner fully coincident with the official views of the Government:

[Footnote 1: After the death of Alexander I. the Russian crown fell to his eldest brother Constantine, military commander of Poland. Accordingly, Constantine was proclaimed emperor, and was recognized as such by Nicholas. Constantine, however, who had secretly abdicated some time previously, insisted on resigning, and Nicholas became Tzar.]

The ruin of the peasants of these provinces [1] are the Zhyds. [2] As property-holders they are here second in importance to the landed nobility. By their commercial pursuits they drain the strength of the hapless White Russian people…. They are everything here: merchants, contractors, saloon-keepers, mill-owners, ferry-holders, artisans…. They are regular leeches, and suck these unfortunate governments [3] to the point of exhaustion. It is a matter of surprise that in 1812 they displayed exemplary loyalty to us and assisted us wherever they could at the risk of their lives.

The characterization of merchants, artisans, mill-owners, and ferry-holders as "leeches" could only spring from a conception which looked upon the Jews as transient foreigners, who, by pursuing any line of endeavor, could only do so at the expense of the natives and thus abused the hospitality offered to them. No wonder then that the future Tzar was puzzled by the display of patriotic sentiments on the part of the Jewish population at the fatal juncture in the history of Russia.

This inimical view of the Jewish people was retained by Nicholas when he became the master of Russian-Jewish destinies....