History of the Incas 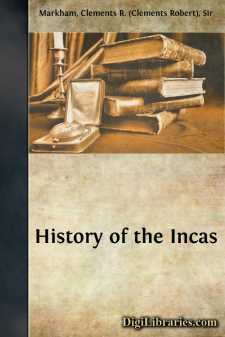 The publication of the text of the Sarmiento manuscript in the Library of Göttingen University, has enabled the Council to present the members of the Hakluyt Society with the most authentic narrative of events connected with the history of the Incas of Peru.

The history of this manuscript, and of the documents which accompanied it, is very interesting. The Viceroy, Don Francisco de Toledo, who governed Peru from 1569 to 1581, caused them to be prepared for the information of Philip II. Four cloths were sent to the King from Cuzco, and a history of the Incas written by Captain Pedro Sarmiento de Gamboa. On three cloths were figures of the Incas with their wives, on medallions, with their Ayllus and a genealogical tree. Historical events in each reign were depicted on the borders. The fable of Tampu-tocco was shown on the first cloth, and also the fables touching the creations of Viracocha, which formed the foundation for the whole history. On the fourth cloth there was a map of Peru, the compass lines for the positions of towns being drawn by Sarmiento.

The Viceroy also caused reports to be made to him, to prove that the Incas were usurpers. There were thirteen reports from Cuzco, Guamanga, Xauxa, Yucay, and other places, forming a folio of 213 leaves, preserved in the Archivo de Indias[1]. At Cuzco all the Inca descendants were called upon to give evidence respecting the history of Peru under their ancestors. They all swore that they would give truthful testimony. The compilation of the history was then entrusted to Captain Pedro Sarmiento de Gamboa, the cosmographer of Peru. When it was completed the book was read to the Inca witnesses, chapter by chapter, in their own language. They discussed each chapter, and suggested some corrections and alterations which were adopted. It was then submitted to the Viceroy, who caused the documents to be attested by the principal Spaniards settled at Cuzco, who had been present at the conquest, or had taken a leading part in the subsequent administration. These were Dr Loarte, the licentiate Polo de Ondegardo[2], Alonso de Mena[3], Mancio Serra de Leguisano[4], Pero Alonso Carrasco, and Juan de Pancorvo[5], in whose house the Viceroy resided while he was at Cuzco. Mancio Serra de Leguisano married Beatriz Ñusta, an Inca princess, daughter of Huayna Ccapac. The Viceroy then made some final interpolations to vilify the Incas, which would not have been approved by some of those who had attested, certainly not by Polo de Ondegardo or Leguisano.

[Note 3: One of the first conquerors. His house at Cuzco was in the square of our Lady, near that of Garcilasso de la Vega.]

[Note 4: A generous defender of the cause of the Indians.]