History of the Girondists, Volume I Personal Memoirs of the Patriots of the French Revolution 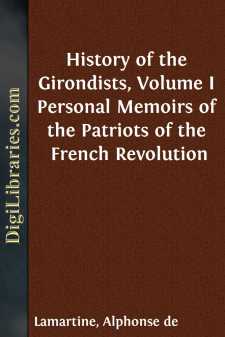 I now undertake to write the history of a small party of men who, cast by Providence into the very centre of the greatest drama of modern times, comprise in themselves the ideas, the passions, the faults, the virtues of their epoch, and whose life and political acts forming, as we may say, the nucleus of the French Revolution, perished by the same blow which crushed the destinies of their country.

This history, full of blood and tears, is full also of instruction for the people. Never, perhaps, were so many tragical events crowded into so short a space of time, never was the mysterious connexion which exists between deeds and their consequences developed with greater rapidity. Never did weaknesses more quickly engender faults,—faults crimes,—crimes punishment. That retributive justice which God has implanted in our very acts, as a conscience more sacred than the fatalism of the ancients, never manifested itself more unequivocally; never was the law of morality illustrated by a more ample testimony, or avenged more mercilessly. Thus the simple recital of these two years is the most luminous commentary of the whole Revolution; and blood, spilled like water, not only shrieks in accents of terror and pity, but gives, indeed, a lesson and an example to mankind. It is in this spirit I would indite this work. The impartiality of history is not that of a mirror, which merely reflects objects, it should be that of a judge who sees, listens, and decides. Annals are not history; in order to deserve that appellation it requires a conviction; for it becomes, in after times, that of the human race.

Recital animated by the imagination, weighed and judged by wisdom,—such is history as the ancients understood it; and of history conceived and produced in such a spirit, I would, under the Divine guidance, leave a fragment to my country.

II. HISTORY OF THE GIRONDISTS.

Mirabeau had just died. The instinct of the people led them to press around the house of his tribune, as if to demand inspiration even from his coffin; but had Mirabeau been still living, he could no longer have given it; his star had paled its fires before that of the Revolution; hurried to the verge of an unavoidable precipice by the very chariot he himself had set in motion, it was in vain that he clung to the tribune. The last memorial he addressed to the king, which the Iron Chest has surrendered to us, together with the secret of his venality, testify the failure and dejection of his mind. His counsels are versatile, incoherent, and almost childish:—now he will arrest the Revolution with a grain of sand—now he places the salvation of the Monarchy in a proclamation of the crown and a regal ceremony which shall revive the popularity of the king,—.and now he is desirous of buying the acclamations of the tribune, and believes the nation, like him, to be purchasable at a price. The pettiness of his means of safety are in contrast with the vast increase of perils; there is a vagueness in every idea; we see that he is impelled by the very passions he has excited, and that unable any longer to guide or control them, he betrays, whilst he is yet unable to crush, them....