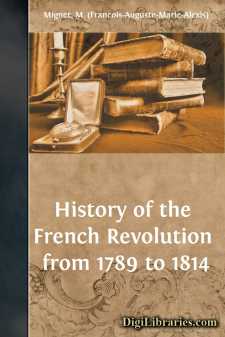 Of the great incidents of History, none has attracted more attention or proved more difficult of interpretation than the French Revolution. The ultimate significance of other striking events and their place in the development of mankind can be readily estimated. It is clear enough that the barbarian invasions marked the death of the classical world, already mortally wounded by the rise of Christianity. It is clear enough that the Renaissance emancipated the human intellect from the trammels of a bastard mediaevalism, that the Reformation consolidated the victory of the "new learning" by including theology among the subjects of human debate. But the French Revolution seems to defy complete analysis. Its complexity was great, its contradictions numerous and astounding. A movement ostensibly directed against despotism culminated in the establishment of a despotism far more complete than that which had been overthrown. The apostles of liberty proscribed whole classes of their fellow-citizens, drenching in innocent blood the land which they claimed to deliver from oppression. The apostles of equality established a tyranny of horror, labouring to extirpate all who had committed the sin of being fortunate. The apostles of fraternity carried fire and sword to the farthest confines of Europe, demanding that a continent should submit to the arbitrary dictation of a single people. And of the Revolution were born the most rigid of modern codes of law, that spirit of militarism which to-day has caused a world to mourn, that intolerance of intolerance which has armed anti-clerical persecutions in all lands. Nor were the actors in the drama less varied than the scenes enacted. The Revolution produced Mirabeau and Talleyrand, Robespierre and Napoleon, Sieyès and Hébert. The marshals of the First Empire, the doctrinaires of the Restoration, the journalists of the Orleanist monarchy, all were alike the children of this generation of storm and stress, of high idealism and gross brutality, of changing fortunes and glory mingled with disaster.

To describe the whole character of a movement so complex, so diverse in its promises and fulfilment, so crowded with incident, so rich in action, may well be declared impossible. No sooner has some proposition been apparently established, than a new aspect of the period is suddenly revealed, and all judgments have forthwith to be revised. That the Revolution was a great event is certain; all else seems to be uncertain. For some it is, as it was for Charles Fox, much the greatest of all events and much the best. For some it is, as it was for Burke, the accursed thing, the abomination of desolation. If its dark side alone be regarded, it oppresses the very soul of man. A king, guilty of little more than amiable weakness and legitimate or pious affection; a queen whose gravest fault was but the frivolity of youth and beauty, was done to death. For loyalty to her friends, Madame Roland died; for loving her husband, Lucille Desmoulins perished....