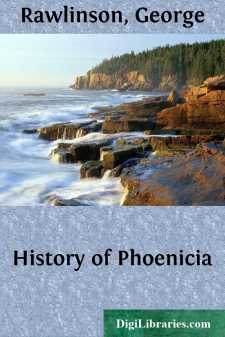 Phoenicé, or Phoenicia, was the name originally given by the Greeks—and afterwards adopted from them by the Romans—to the coast region of the Mediterranean, where it faces the west between the thirty-second and the thirty-sixth parallels. Here, it would seem, in their early voyagings, the Pre-Homeric Greeks first came upon a land where the palm-tree was not only indigenous, but formed a leading and striking characteristic, everywhere along the low sandy shore lifting its tuft of feathery leaves into the bright blue sky, high above the undergrowth of fig, and pomegranate, and alive. Hence they called the tract Phoenicia, or "the Land of Palms;" and the people who inhabited it the Phoenicians, or "the Palm-tree people."

The term was from the first applied with a good deal of vagueness. It was probably originally given to the region opposite Cyprus, from Gabala in the north—now Jebili—to Antaradus (Tortosa) and Marathus (Amrith) towards the south, where the palm-tree was first seen growing in rich abundance. The palm is the numismatic emblem of Aradus, and though not now very frequent in the region which Strabo calls "the Aradian coast-tract," must anciently have been among its chief ornaments. As the Grecian knowledge of the coast extended southward, and a richer and still richer growth of the palm was continually noticed, almost every town and every village being embosomed in a circle of palm groves, the name extended itself until it reached as far south at any rate as Gaza, or (according to some) as Rhinocolura and the Torrens Ægypti. Northward the name seems never to have passed beyond Cape Posideium (Possidi) at the foot of Mount Casius, the tract between this and the range of Taurus being always known as Syria, never as Phoenecia or Phoenicé.

The entire length of the coast between the limits of Cape Possidi and Rhinocolura is, without reckoning the lesser indentations, about 380 miles, or nearly the same as that of Portugal. The indentations of the coast-line are slight. From Rhinocolura to Mount Carmel, a distance of 150 miles, not a single strong promontory asserts itself, nor is there a single bay of sufficient depth to attract the attention of geographers. Carmel itself is a notable headland, and shelters a bay of some size; but these once passed the old uniformity returns, the line being again almost unbroken for a distance of seventy-five miles, from Haifa to Beyrout (Berytus)....