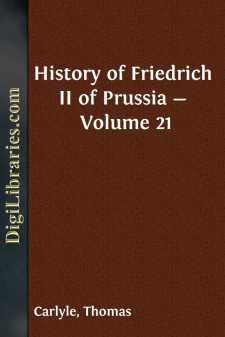 The Twelve Hercules-labors of this King have ended here; what was required of him in World-History is accomplished. There remain to Friedrich Twenty-three Years more of Life, which to Prussian History are as full of importance as ever; but do not essentially concern European History, Europe having gone the road we now see it in. On the grand World-Theatre the curtain has fallen for a New Act; Friedrich's part, like everybody's for the present, is played out. In fact, there is, during the rest of his Reign, nothing of World-History to be dwelt on anywhere. America, it has been decided, shall be English; Prussia be a Nation. The French, as finis of their attempt to cut Germany in Four, find themselves sunk into torpor, abeyance and dry-rot; fermenting towards they know not what. Towards Spontaneous Combustion in the year 1789, and for long years onwards!

There, readers, there is the next milestone for you, in the History of Mankind! That universal Burning-up, as in hell-fire, of Human Shams. The oath of Twenty-five Million men, which has since become that of all men whatsoever, "Rather than live longer under lies, we will die!"—that is the New Act in World-History. New Act,—or, we may call it New PART; Drama of World-History, Part Third. If Part SECOND was 1,800 years ago, this I reckon will be Part THIRD. This is the truly celestial-infernal Event: the strangest we have seen for a thousand years. Celestial in one part; in the other, infernal. For it is withal the breaking out of universal mankind into Anarchy, into the faith and practice of NO-Government,—that is to say (if you will be candid), into unappeasable Revolt against Sham-Governors and Sham-Teachers,—which I do charitably define to be a Search, most unconscious, yet in deadly earnest, for true Governors and Teachers. That is the one fact of World-History worth dwelling on at this day; and Friedrich cannot be said to have had much hand farther in that.

Nor is the progress of a French or European world, all silently ripening and rotting towards such issue, a thing one wishes to dwell on. Only when the Spontaneous Combustion breaks out; and, many-colored, with loud noises, envelops the whole world in anarchic flame for long hundreds of years: then has the Event come; there is the thing for all men to mark, and to study and scrutinize as the strangest thing they ever saw. Centuries of it yet lying ahead of us; several sad Centuries, sordidly tumultuous, and good for little! Say Two Centuries yet,—say even Ten of such a process: before the Old is completely burnt out, and the New in any state of sightliness? Millennium of Anarchies;—abridge it, spend your heart's-blood upon abridging it, ye Heroic Wise that are to come! For it is the consummation of All the Anarchies that are and were;—which I do trust always means the death (temporary death) of them! Death of the Anarchies: or a world once more built wholly on Fact better or worse; and the lying jargoning professor of Sham-Fact, whose name is Legion, who as yet (oftenest little conscious of himself) goes tumulting and swarming from shore to shore, become a species extinct, and well known to be gone down to Tophet!—

There were bits of Anarchies before, little and greater: but till that of France in 1789, there was none long memorable; all were pygmies in comparison, and not worth mentioning separately....