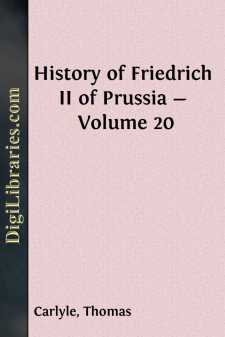 There were yet, to the world's surprise and regret, Three Campaigns of this War; but the Campaign 1760, which we are now upon, was what produced or rendered possible the other two;—was the crisis of them, and is now the only one that can require much narrative from us here. Ill-luck, which, Friedrich complains, had followed him like his shadow, in a strange and fateful manner, from the day of Kunersdorf and earlier, does not yet cease its sad company; but, on the contrary, for long months to come, is more constant than ever, baffling every effort of his own, and from the distance sending him news of mere disaster and discomfiture. It is in this Campaign, though not till far on in it, that the long lane does prove to have a turning, and the Fortune of War recovers its old impartial form. After which, things visibly languish: and the hope of ruining such a Friedrich becomes problematic, the effort to do it slackens also; the very will abating, on the Austrian part, year by year, as of course the strength of their resources is still more steadily doing. To the last, Friedrich, the weaker in material resources, needs all his talent,—all his luck too. But, as the strength, on both sides, is fast abating,—hard to say on which side faster (Friedrich's talent being always a FIXED quantity, while all else is fluctuating and vanishing),—what remains of the once terrible Affair, through Campaigns Sixth and Seventh, is like a race between spent horses, little to be said of it in comparison. Campaign 1760 is the last of any outward eminence or greatness of event. Let us diligently follow that, and be compendious with the remainder.

Friedrich was always famed for his Marches; but, this Year, they exceeded all calculation and example; and are still the admiration of military men. Can there by no method be some distant notion afforded of them to the general reader? They were the one resource Friedrich had left, against such overwhelming superiority in numbers; and they came out like surprises in a theatre,—unpleasantly surprising to Daun. Done with such dexterity, rapidity and inexhaustible contrivance and ingenuity, as overset the schemes of his enemies again and again, and made his one army equivalent in effect to their three.

Evening of April 25th, Friedrich rose from his Freyberg cantonments; moved back, that is, northward, a good march; then encamped himself between Elbe and the Hill-Country; with freer prospect and more elbow-room for work coming. His left is on Meissen and the Elbe; his right at a Village called the Katzenhauser, an uncommonly strong camp, of which one often hears afterwards; his centre camp is at Schlettau, which also is strong, though not to such a degree. This line extends from Meissen southward about 10 miles, commanding the Reich-ward Passes of the Metal Mountains, and is defensive of Leipzig, Torgau and the Towns thereabouts. [Tempelhof, iv. 16 et seq.] Katzenhauser is but a mile or two from Krogis—that unfortunate Village where Finck got his Maxen Order: "ER WEISS,—You know I can't stand having difficulties raised; manage to do it!"