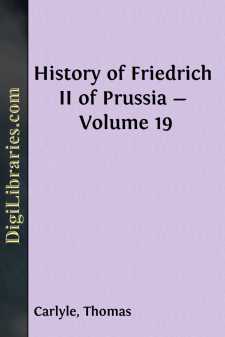 Chapter I.—PRELIMINARIES TO A FOURTH CAMPAIGN.

The posting of the Five Armies this Winter—Five of them in Germany, not counting the Russians, who have vanished to Cimmeria over the horizon, for their months of rest—is something wonderful, and strikes the picturesque imagination. Such a Chain of Posts, for length, if for nothing else! From the centre of Bohemia eastward, Daun's Austrians are spread all round the western Silesian Border and the southeastern Saxon; waited on by Prussians, in more or less proximity. Next are the Reichsfolk; scattered over Thuringen and the Franconian Countries; fronting partly into Hessen and Duke Ferdinand's outskirts:—the main body of Duke Ferdinand is far to westward, in Munster Country, vigilant upon Contades, with the Rhine between. Contades and Soubise,—adjoining on the Reichsfolk are these Two French Armies: Soubise's, some 25,000, in Frankfurt-Ems Country, between the Mayn and the Lahn, with its back to the Rhine; then Contades, onward to Maes River and the Dutch Borders, with his face to the Rhine,—and Duke Ferdinand observant of him on the other side. That is the "CORDON of Posts" or winter-quarters this Year. "From the Giant Mountains and the Metal Mountains, to the Ocean;—to the mouth of Rhine," may we not say; "and back again to the Swiss Alps or springs of Rhine, that Upper-Rhine Country being all either French or Austrian, and a basis for Soubise?" [Archenholtz, i. 306.] Not to speak of Ocean itself, and its winged War-Fleets, lonesomely hovering and patrolling; or of the Americas and Indies beyond!

"This is such a Chain of mutually vigilant Winter-quarters," says Archenholtz, "as was never drawn in Germany, or in Europe, before." Chain of about 300,000 fighting men, poured out in that lengthy manner. Taking their winter siesta there, asleep with one eye open, till reinforced for new business of death and destruction against Spring. Pathetic surely, as well as picturesque. "Three Campaigns there have already been," sighs the peaceable observer: "Three Campaigns, surely furious enough; Eleven Battles in them," [Stenzel, v. 185. This, I suppose, would be his enumeration: LOBOSITZ (1756); PRAG, KOLIN, Hastenbeck, Gross-Jagersdorf, ROSSBACH, Breslau, LEUTHEN, (1757); Crefeld, ZORNDORF, HOCHKIRCH (1758): "eleven hitherto in all."] a Prag, a Kolin, Leuthen, Rossbach;—must there still be others, then, to the misery of poor mankind?" thus sigh many peaceful persons. Not considering what are, and have been, the rages, the iniquities, the loud and silent deliriums, the mad blindnesses and sins of mankind; and what amount, of CALCINING these may reasonably take. Not calcinable in three Campaigns at all, it would appear! Four more Campaigns are needed: then there will be innocuous ashes in quantity; and a result unexpected, and worth marking in World-History.

It is notably one of Friedrich's fond hopes,—of which he keeps up several, as bright cloud-hangings in the haggard inner world he now has,—that Peace is just at hand; one right struggle more, and Peace must come!...