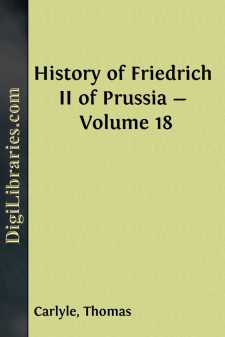 Seldom was there seen such a combination against any man as this against Friedrich, after his Saxon performances in 1756. The extent of his sin, which is now ascertained to have been what we saw, was at that time considered to transcend all computation, and to mark him out for partition, for suppression and enchainment, as the general enemy of mankind. "Partition him, cut him down," said the Great Powers to one another; and are busy, as never before, in raising forces, inciting new alliances and calling out the general POSSE COMITATUS of mankind, for that salutary object. What tempestuous fulminations in the Reichstag, and over all Europe, England alone excepted, against this man!

Latterly the Swedes, who at first had compunctions on the score of Protestantism, have agreed to join in the Partitioning adventure: "It brings us his Pommern, all Pommern ours!" cry the Swedish Parliamentary Eloquences (with French gold in their pocket): "At any rate," whisper they, "it spites the Queen his Sister!"—and drag the poor Swedish Nation into a series of disgraces and disastrous platitudes it was little anticipating. This precious French-Swedish Bargain ("Swedes to invade with 25,000; France to give fair subsidy," and bribe largely) was consummated in March; ["21st March, 1757" (Stenzel, v. 38; &c.).] but did not become known to Friedrich for some months later; nor was it of the importance he then thought it, in the first moment of surprise and provocation. Not indeed of importance to anybody, except, in the reverse way, to poor Sweden itself, and to the French, who had spent a great deal of pains and money on it, and continued to spend, with as good as no result at all. For there never was such a War, before or since, not even by Sweden in the Captainless state! And the one profit the copartners reaped from it, was some discountenance it gave to the rumor which had risen, more extensively than we should now think, and even some nucleus of fact in it as appears, That Austria, France and the Catholic part of the Reich were combining to put down Protestantism. To which they could now answer, "See, Protestant Sweden is with us!"—and so weaken a little what was pretty much Friedrich's last hold on the public sympathies at this time.

As to France itself,—to France, Austria, Russia,—bound by such earthly Treaties, and the call of very Heaven, shall they not, in united puissance and indignation, rise to the rescue? France, touched to the heart by such treatment of a Saxon Kurfurst, and bound by Treaty of Westphalia to protect all members of the Reich (which it has sometimes, to our own knowledge, so carefully done), is almost more ardent than Austria itself. France, Austria, Russia; to these add Polish Majesty himself; and latterly the very Swedes, by French bribery at Stockholm: these are the Partitioning Powers;—and their shares (let us spare one line for their shares) are as follows.

The Swedes are to have Pommern in whole; Polish-Saxon Majesty gets Magdeburg, Halle, and opulent slices thereabouts; Austria's share, we need not say, is that jewel of a Silesia....