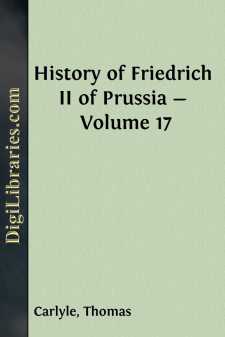 Chapter I.—WHAT FRIEDRICH HAD READ IN THE MENZEL DOCUMENTS.

The ill-informed world, entirely unaware of what Friedrich had been studying and ascertaining, to his bitter sorrow, for four years past, was extremely astonished at the part he took in those French-English troubles; extremely provoked at his breaking out again into a Third Silesian War, greater than all the others, and kindling all Europe in such a way. The ill-informed world rang violently, then and long after, with a Controversy, "Was it of his beginning, or Not of his beginning?" Controversy, which may in our day be considered as settled by unanimous mankind; finished forever; and can now have no interest for any creature.

Omitting that, our problem is (were it possible in brief compass), To set forth, by what authentic traits there are,—not the "ambitious," "audacious," voracious and highly condemnable Friedrich of the Gazetteers,—but the thrice-intricately situated Friedrich of Fact. What the Facts privately known to Friedrich were, in what manner known; and how, in a more complex crisis than had yet been, Friedrich demeaned himself: upon which latter point, and those cognate to it, readers ought not to be ignorant, if now fallen indifferent on so many other points of the Affair. What a loud-roaring, loose and empty matter is this tornado of vociferation which men call "Public Opinion"! Tragically howling round a man; who has to stand silent the while; and scan, wisely under pain of death, the altogether inarticulate, dumb and inexorable matter which the gods call Fact! Friedrich did read his terrible Sphinx-riddle; the Gazetteer tornado did pipe and blow. King Friedrich, in contrast with his Environment at that time, will most likely never be portrayed to modern men in his real proportions, real aspect and attitude then and there,—which are silently not a little heroic and even pathetic, when well seen into;—and, for certain, he is not portrayable at present, on our side of the Sea. But what hints and fractions of feature we authentically have, ought to be given with exactitude, especially with brevity, and left to the ingenuous imagination of readers.

The secret sources of the Third Silesian War, since called "Seven-Years War," go back to 1745; nay, we may say, to the First Invasion of Silesia in 1740. For it was in Maria Theresa's incurable sorrow at loss of Silesia, and her inextinguishable hope to reconquer it, that this and all Friedrich's other Wars had their origin. Twice she had signed Peace with Friedrich, and solemnly ceded Silesia to him: but that too, with the Imperial Lady, was by no means a finis to the business. Not that she meant to break her Treaties; far from her such a thought,—in the conscious form. Though, alas, in the unconscious, again, it was always rather near! practically, she reckoned to herself, these Treaties would come to be broken, as Treaties do not endure forever; and then, at the good moment, she did purpose to be ready. "Silesia back to us; Pragmatic Sanction complete in every point! Was not that our dear Father's will, monition of all our Fathers and their Patriotisms and Traditionary Heroisms; and in fact, the behest of gods and men?" Ten years ago, this notion had been cut down to apparent death, in a disastrous manner, for the second time....