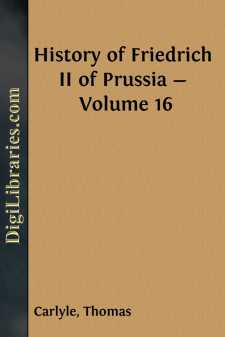 Friedrich has now climbed the heights, and sees himself on the upper table-land of Victory and Success; his desperate life-and-death struggles triumphantly ended. What may be ahead, nobody knows; but here is fair outlook that his enemies and Austria itself have had enough of him. No wringing of his Silesia from this "bad Man." Not to be overset, this one, by never such exertions; oversets US, on the contrary, plunges us heels-over-head into the ditch, so often as we like to apply to him; nothing but heavy beatings, disastrous breaking of crowns, to be had on trying there! "Five Victories!" as Voltaire keeps counting on his fingers, with upturned eyes,—Mollwitz, Chotusitz, Striegau, Sohr, Kesselsdorf (the last done by Anhalt; but omitting Hennersdorf, and that sudden slitting of the big Saxon-Austrian Projects into a cloud of feathers, as fine a feat as any),—"Five Victories!" counts Voltaire; calling on everybody (or everybody but Friedrich himself, who is easily sated with that kind of thing) to admire. In the world are many opinions about Friedrich. In Austria, for instance, what an opinion; sinister, gloomy in the extreme: or in England, which derives from Austria,—only with additional dimness, and with gloomy new provocations of its own before long! Many opinions about Friedrich, all dim enough: but this, that he is a very demon for fighting, and the stoutest King walking the Earth just now, may well be a universal one. A man better not be meddled with, if he will be at peace, as he professes to wish being.

Friedrich accordingly is not meddled with, or not openly meddled with; and has, for the Ten or Eleven Years coming, a time of perfect external Peace. He himself is decided "not to fight with a cat," if he can get the peace kept; and for about eight years hopes confidently that this, by good management, will continue possible;—till, in the last three years, electric symptoms did again disclose themselves, and such hope more and more died away. It is well known there lay in the fates a Third Silesian War for him, worse than both the others; which is now the main segment of his History still lying ahead for us, were this Halcyon Period done. Halcyon Period counts from Christmas-day, Dresden, 1745,—"from this day, Peace to the end of my life!" had been Friedrich's fond hope. But on the 9th day of September, 1756, Friedrich was again entering Dresden (Saxony some twelve days before); and the Crowning Struggle of his Life was, beyond all expectation, found to be still lying ahead for him, awfully dubious for Seven Years thereafter!—

Friedrich's History during this intervening Halcyon or Peace Period must, in some way, be made known to readers: but for a great many reasons, especially at present, it behooves to be given in compressed form; riddled down, to an immense extent, out of those sad Prussian Repositories, where the grain of perennial, of significant and still memorable, lies overwhelmed under rubbish-mountains of the fairly extinct, the poisonously dusty and forgettable;—ACH HIMMEL!...