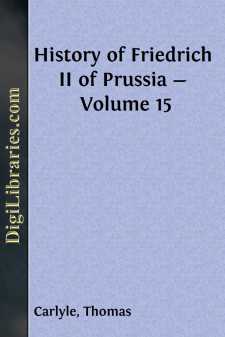 Chapter I.—PRELIMINARY: HOW THE MOMENT ARRIVED.

Battle being once seen to be inevitable, it was Friedrich's plan not to wait for it, but to give it. Thanks to Friedrich Wilhelm and himself, there is no Army, nor ever was any, in such continual preparation. Military people say, "Some Countries take six months, some twelve, to get in motion for war: but in three weeks Prussia can be across the marches, and upon the throat of its enemy." Which is an immense advantage to little Prussia among its big neighbors. "Some Countries have a longer sword than Prussia; but none can unsheathe it so soon:"—we hope, too, it is moderately sharp, when wielded by a deft hand.

The French, as was intimated, are in great vigor, this Year; thoroughly provoked; and especially since Friedrich sent his Rothenburg among them, have been doing their very utmost. Their main effort is in the Netherlands, at present;—and indeed, as happened, continues all through this War to be. They by no means intend, or ever did, to neglect Teutschland; yet it turns out, they have pretty much done with their fighting there. And next Year, driven or led by accidents of various kinds, they quit it altogether; and turning their whole strength upon the Netherlands and Italy, chiefly on the Netherlands, leave Friedrich, much to his astonishment, with the German War hanging wholly round HIS neck, and take no charge of it farther! In which, to Friedrich's Biographers, there is this inestimable benefit, if far the reverse to Friedrich's self: That we shall soon have done with the French, then; with them and with so much else; and may, in time coming, for most part, leave their huge Sorcerer's Sabbath of a European War to dance itself out, well in the distance, not encumbering us farther, like a circumambient Bedlam, as it has hitherto done. Courage, reader! Let us give, in a glance or two, some notion of the course things took, and what moment it was when Friedrich struck in;—whom alone, or almost alone, we hope to follow thenceforth; "Dismal Swamp" (so gracious was Heaven to us) lying now mostly to rearward, little as we hoped it!

It was mere accident, a series of bad accidents, that led King Louis and his Ministers into gradually forsaking Friedrich. They were the farthest in the world from intending such a thing. Contrariwise, what brain-beating, diplomatic spider-weaving, practical contriving, now and afterwards, for that object; especially now! Rothenburg, Noailles, Belleisle, Cardinal Tencin, have been busy; not less the mistress Chateauroux, who admires Friedrich, being indeed a high-minded unfortunate female, as they say; and has thrown out Amelot, not for stammering alone. They are able, almost high people, this new Chateauroux Ministry, compared with some; and already show results.

Nay, what is most important of all, France has (unconsciously, or by mere help of Noailles and luck) got a real General to her Armies: Comte de Saxe, now Marechal de Saxe; who will shine very splendent in these Netherland operations,—counter-shone by mere Wades, D'Ahrembergs, Cumberlands,—in this and the Four following Years....