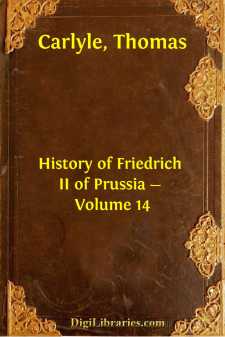 Friedrich's own Peace being made on such terms, his wish and hope was, that it might soon be followed by a general European one; that, the live-coal, which had kindled this War, being quenched, the War itself might go out. Silesia is his; farther interest in the Controversy, except that it would end itself in some fair manner, he has none. "Silesia being settled," think many, thinks Friedrich for one, "what else of real and solid is there to settle?"

The European Public, or benevolent individuals of it everywhere, indulged also in this hope. "How glorious is my King, the youngest of the Kings and the grandest!" exclaims Voltaire (in his Letters to Friedrich, at this time), and re-exclaims, till Friedrich has to interfere, and politely stop it: "A King who carries in the one hand an all-conquering sword, but in the other a blessed olive-branch, and is the Arbiter of Europe for Peace or War!" "Friedrich the THIRD [so Voltaire calls him, counting ill, or misled by ignorance of German nomenclature], Friedrich the Third, I mean Friedrich the Great (FREDERIC LE GRAND)," will do this, and do that;—probably the first emergence of that epithet in human speech, as yet in a quite private hypothetic way. [Letters of Voltaire, in OEuvres de Frederic, xxii. 100, &c.: this last Letter is of date "July, 1742"—almost contemporary with the "Jauer Transparency" noticed above.] Opinions about Friedrich's conduct, about his talents, his moralities, there were many (all wide of the mark): but this seemed clear, That the weight of such a sword as his, thrown into either scale, would be decisive; and that he evidently now wished peace. An unquestionable fact, that latter! Wished it, yes, right heartily; and also strove to hope,—though with less confidence than the benevolent outside Public, as knowing the interior of the elements better.

These hopes, how fond they were, we now all know. True, my friends, the live-coal which kindled this incendiary whirlpool (ONE of the live-coals, first of them that spread actual flame in these European parts, and first of them all except Jenkins's Ear) is out, fairly withdrawn; but the fire, you perceive, rages not the less. The fire will not quench itself, I doubt, till the bitumen, sulphur and other angry fuel have run much lower! Austria has fighting men in abundance, England behind it has guineas; Austria has got injuries, then successes:—there is in Austria withal a dumb pride, quite equal in pretensions to the vocal vanity of France, and far more stubborn of humor. The First Nation of the Universe, rashly hurling its fine-throated hunting-pack, or Army of the Oriflamme, into Austria,—see what a sort of badgers, and gloomily indignant bears, it has awakened there! Friedrich had to take arms again; and an unwelcome task it was to him, and a sore and costly. We shall be obliged (what is our grand difficulty in this History) to note, in their order, the series of European occurrences; and, tedious as the matter now is, keep readers acquainted with the current of that big War; in which, except Friedrich broad awake, and the Ear of Jenkins in somnambulancy, there is now next to nothing to interest a human creature....