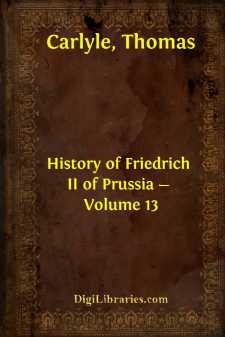 Chapter I. — BRITANNIC MAJESTY AS PALADIN OF THE PRAGMATIC.

Part, is now perhaps conceivable to readers. But as to the Second, the Germanic or Pragmatic Part,—articulate History, after much consideration, is content to renounce attempting these; feels that these will remain forever inconceivable to mankind in the now altered times. So small a gentleman; and he feels, dismally though with heroism, that he has got the axis of the world on his shoulder. Poor Majesty! His eyes, proud as Jove's, are nothing like so perspicacious; a pair of the poorest eyes: and he has to scan with them, and unriddle under pain of death, such a waste of insoluble intricacies, troubles and world-perils as seldom was,—even in Dreams. In fact, it is of the nature of a long Nightmare Dream, all this of the Pragmatic, to his poor Majesty and Nation; and wakeful History must not spend herself upon it, beyond the essential.

May 12th, betimes this Year, his Majesty got across to Hanover, Harrington with him; anxious to contemplate near at hand that Camp of the Old Dessauer's at Gottin, and the other fearful phenomena, French, Prussian and other, in that Country. His Majesty, as natural, was much in Germany in those Years; scanning the phenomena; a long while not knowing what in the world to make of them. Bully Belleisle having stept into the ring, it is evident, clear as the sun, that one must act, and act at once; but it is a perfect sphinx-enigma to say How. Seldom was Sovereign or man so spurred, and goaded on, by the highest considerations; and then so held down, and chained to his place, by an imbroglio of counter-considerations and sphinx-riddles! Thrice over, at different dates (which shall be given), the first of them this Year, he starts up as in spasm, determined to draw sword, and plunge in; twice he is crushed down again, with sword half drawn; and only the third time (in 1743) does he get sword out, and brandish it in a surprising though useless manner. After which he feels better. But up to that crisis, his case is really tragical,—had idle readers any bowels for him; which they have not! One or two Fractions, snatched from the circumambient Paper Vortex, must suffice us for the indispensable in this place:—

CUNCTATIONS, YET INCESSANT AND UBIQUITOUS ENDEAVORINGS, OF HIS BRITANNIC MAJESTY (1741-1743).

... After the wonderful Russian Partition-Treaty, which his English Walpoles would not hear of,—and which has produced the Camp of Gottin, see, your Majesty!—George does nothing rashly. Far from it: indeed, except it be paying money, he becomes again a miracle of cunctations; and staggers about for years to come, like the—Shall we say, like the White Hanover Horse amid half a dozen sieves of beans? Alas, no, like the Hanover Horse with the shadows of half a dozen Damocles'-swords dangling into the eyes of it;—enough to drive any Horse to its wit's end!—

"To do, to dare," thinks the Britannic Majesty;—yes, and of daring there is a plenty: but, "In which direction? What, How?" these are questions for a fussy little gentleman called to take the world on his shoulders....