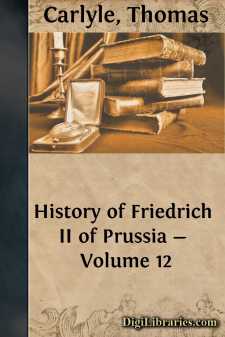 Chapter I. — OF SCHLESIEN, OR SILESIA.

Schlesien, what we call Silesia, lies in elliptic shape, spread on the top of Europe, partly girt with mountains, like the crown or crest to that part of the Earth;—highest table-land of Germany or of the Cisalpine Countries; and sending rivers into all the seas. The summit or highest level of it is in the southwest; longest diameter is from northwest to southeast. From Crossen, whither Friedrich is now driving, to the Jablunka Pass, which issues upon Hungary, is above 250 miles; the AXIS, therefore, or longest diameter, of our Ellipse we may call 230 English miles;—its shortest or conjugate diameter, from Friedland in Bohemia (Wallenstein's old Friedland), by Breslau across the Oder to the Polish Frontier, is about 100. The total area of Schlesien is counted to be some 20,000 square miles, nearly the third of England Proper.

Schlesien—will the reader learn to call it by that name, on occasion? for in these sad Manuscripts of ours the names alternate—is a fine, fertile, useful and beautiful Country. It leans sloping, as we hinted, to the East and to the North; a long curved buttress of Mountains ("RIESENGEBIRGE, Giant Mountains," is their best-known name in foreign countries) holding it up on the South and West sides. This Giant-Mountain Range,—which is a kind of continuation of the Saxon-Bohemian "Metal Mountains (ERZGEBIRGE)" and of the straggling Lausitz Mountains, to westward of these,—shapes itself like a bill-hook (or elliptically, as was said): handle and hook together may be some 200 miles in length. The precipitous side of this is, in general, turned outwards, towards Bohmen, Mahren, Ungarn (Bohemia, Moravia, Hungary, in our dialects); and Schlesien lies inside, irregularly sloping down, towards the Baltic and towards the utmost East, From the Bohemian side of these Mountains there rise two Rivers: Elbe, tending for the West; Morawa for the South;—Morawa, crossing Moravia, gets into the Donau, and thence into the Black-Sea; while Elbe, after intricate adventures among the mountains, and then prosperously across the plains, is out, with its many ships, into the Atlantic. Two rivers, we say, from the Bohemian or steep side: and again, from the Silesian side, there rise other two, the Oder and the Weichsel (VISTULA); which start pretty near one another in the Southeast, and, after wide windings, get both into the Baltic, at a good distance apart.

For the first thirty, or in parts, fifty miles from the Mountains, Silesia slopes somewhat rapidly; and is still to be called a Hill-country, rugged extensive elevations diversifying it: but after that, the slope is gentle, and at length insensible, or noticeable only by the way the waters run. From the central part of it, Schlesien pictures itself to you as a plain; growing ever flatter, ever sandier, as it abuts on the monotonous endless sand-flats of Poland, and the Brandenburg territories; nothing but Boundary Stones with their brass inscriptions marking where the transition is; and only some Fortified Town, not far off, keeping the door of the Country secure in that quarter....