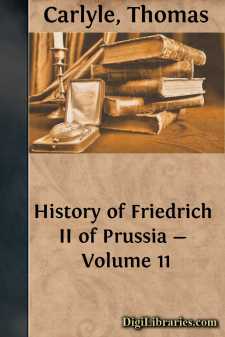 Chapter I. — PHENOMENA OF FRIEDRICH'S ACCESSION.

In Berlin, from Tuesday, 31st May, 1740, day of the late King's death, till the Thursday following, the post was stopped and the gates closed; no estafette can be despatched, though Dickens and all the Ambassadors are busy writing. On the Thursday, Regiments, Officers, principal Officials having sworn, and the new King being fairly in the saddle, estafettes and post-boys shoot forth at the top of their speed; and Rumor, towards every point of the compass, apprises mankind what immense news there is. [Dickens (in State-Paper Office), 4th June, 1740.]

A King's Accession is always a hopeful phenomenon to the public; more especially a young King's, who has been talked of for his talents and aspirings,—for his sufferings, were it nothing more,—and whose ANTI-MACHIAVEL is understood to be in the press. Vaguely everywhere there has a notion gone abroad that this young King will prove considerable. Here at last has a Lover of Philosophy got upon the throne, and great philanthropies and magnanimities are to be expected, think rash editors and idle mankind. Rash editors in England and elsewhere, we observe, are ready to believe that Friedrich has not only disbanded the Potsdam Giants; but means to "reduce the Prussian Army one half" or so, for ease (temporary ease which we hope will be lasting) of parties concerned; and to go much upon emancipation, political rose-water, and friendship to humanity, as we now call it.

At his first meeting of Council, they say, he put this question, "Could not the Prussian Army be reduced to 45,000?" The excellent young man. To which the Council had answered, "Hardly, your Majesty! The Julich-and-Berg affair is so ominous hitherto!" These may be secrets, and dubious to people out of doors, thinks a wise editor; but one thing patent to the day was this, surely symbolical enough: On one of his Majesty's first drives to Potsdam or from it, a thousand children,—in round numbers a thousand of them, all with the RED STRING round their necks, and liable to be taken for soldiers, if needed in the regiment of their Canton,—a thousand children met this young King at a turn of his road; and with shrill unison of wail, sang out: "Oh, deliver us from slavery,"—from the red threads, your Majesty. Why should poor we be liable to suffer hardship for our Country or otherwise, your Majesty! Can no one else be got to do it? sang out the thousand children. And his Majesty assented on the spot, thinks the rash editor. [Gentleman's Magazine (London, 1740), x. 318; Newspapers, &c.] "Goose, Madam?" exclaimed a philanthropist projector once, whose scheme of sweeping chimneys by pulling a live goose down through them was objected to: "Goose, Madam? You can take two ducks, then, if you are so sorry for the goose!"—Rash editors think there is to be a reign of Astraea Redux in Prussia, by means of this young King; and forget to ask themselves, as the young King must by no means do, How far Astraea may be possible, for Prussia and him?

At home, too, there is prophesying enough, vague hope enough, which for most part goes wide of the mark....