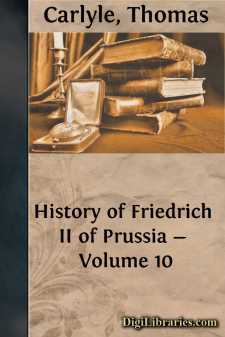 Chapter I. — MANSION OF REINSBERG.

On the Crown-Prince's Marriage, three years ago, when the AMT or Government-District RUPPIN, with its incomings, was assigned to him for revenue, we heard withal of a residence getting ready. Hint had fallen from the Prince, that Reinsberg, an old Country-seat, standing with its Domain round it in that little Territory of Ruppin, and probably purchasable as was understood, might be pleasant, were it once his and well put in repair. Which hint the kind paternal Majesty instantly proceeded to act upon. He straightway gave orders for the purchase of Reinsberg; concluded said purchase, on fair terms, after some months' bargaining; [23d October, 1733, order given,—16th March, 1734, purchase completed (Preuss, i. 75).]—and set his best Architect, one Kemeter, to work, in concert with the Crown-Prince, to new-build and enlarge the decayed Schloss of Reinsberg into such a Mansion as the young Royal Highness and his Wife would like.

Kemeter has been busy, all this while; a solid, elegant, yet frugal builder: and now the main body of the Mansion is complete, or nearly so, the wings and adjuncts going steadily forward; Mansion so far ready that the Royal Highnesses can take up their abode in it. Which they do, this Autumn, 1736; and fairly commence Joint Housekeeping, in a permanent manner. Hitherto it has been intermittent only: hitherto the Crown-Princess has resided in their Berlin Mansion, or in her own Country-house at Schonhausen; Husband not habitually with her, except when on leave of absence from Ruppin, in Carnival time or for shorter periods. At Ruppin his life has been rather that of a bachelor, or husband abroad on business; up to this time. But now at Reinsberg they do kindle the sacred hearth together; "6th August, 1736," the date of that important event. They have got their Court about them, dames and cavaliers more than we expected; they have arranged the furnitures of their existence here on fit scale, and set up their Lares and Penates on a thrifty footing. Majesty and Queen come out on a visit to them next month; [4th September, 1736 (Ib.).]—raising the sacred hearth into its first considerable blaze, and crowning the operation in a human manner.

And so there has a new epoch arisen for the Crown-Prince and his Consort. A new, and much-improved one. It lasted into the fourth year; rather improving all the way: and only Kingship, which, if a higher sphere, was a far less pleasant one, put an end to it. Friedrich's happiest time was this at Reinsberg; the little Four Years of Hope, Composure, realizable Idealism: an actual snatch of something like the Idyllic, appointed him in a life-pilgrimage consisting otherwise of realisms oftenest contradictory enough, and sometimes of very grim complexion. He is master of his work, he is adjusted to the practical conditions set him; conditions once complied with, daily work done, he lives to the Muses, to the spiritual improvements, to the social enjoyments; and has, though not without flaws of ill-weather,—from the Tobacco-Parliament perhaps rather less than formerly, and from the Finance-quarter perhaps rather more,—a sunny time....