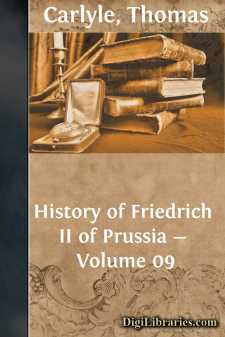 We described the Crown-Prince as intent to comply, especially in all visible external particulars, with Papa's will and pleasure;—to distinguish himself by real excellence in Commandantship of the Regiment Goltz, first of all. But before ever getting into that, there has another point risen, on which obedience, equally essential, may be still more difficult.

Ever since the grand Catastrophe went off WITHOUT taking Friedrich's head along with it, and there began to be hopes of a pacific settlement, question has been, Whom shall the Crown-Prince marry? And the debates about it in the Royal breast and in Tobacco-Parliament, and rumors about it in the world at large, have been manifold and continual. In the Schulenburg Letters we saw the Crown-Prince himself much interested, and eagerly inquisitive on that head. As was natural: but it is not in the Crown-Prince's mind, it is in the Tobacco-Parliament, and the Royal breast as influenced there, that the thing must be decided. Who in the world will it be, then? Crown-Prince himself hears now of this party, now of that. England is quite over, and the Princess Amelia sunk below the horizon. Friedrich himself appears a little piqued that Hotham carried his nose so high; that the English would not, in those life-and-death circumstances, abate the least from their "Both marriages or none,"—thinks they should have saved Wilhelmina, and taken his word of honor for the rest. England is now out of his head;—all romance is too sorrowfully swept out: and instead of the "sacred air-cities of hope" in this high section of his history, the young man is looking into the "mean clay hamlets of reality," with an eye well recognizing them for real. With an eye and heart already tempered to the due hardness for them. Not a fortunate result, though it was an inevitable one. We saw him flirting with the beautiful wedded Wreech; talking to Lieutenant-General Schulenburg about marriage, in a way which shook the pipe-clay of that virtuous man. He knows he would not get his choice, if he had one; strives not to care. Nor does he, in fact, much care; the romance being all out of it. He looks mainly to outward advantages; to personal appearance, temper, good manners; to "religious principle," sometimes rather in the reverse way (fearing an OVERPLUS rather);—but always to likelihood of moneys by the match, as a very direct item. Ready command of money, he feels, will be extremely desirable in a Wife; desirable and almost indispensable, in present straitened circumstances. These are the notions of this ill-situated Coelebs.

The parties proposed first and last, and rumored of in Newspapers and the idle brains of men, have been very many,—no limit to their numbers; it MAY be anybody: an intending purchaser, though but possessed of sixpence, is in a sense proprietor of the whole Fair! Through Schulenburg we heard his own account of them, last Autumn;—but the far noblest of the lot was hardly glanced at, or not at all, on that occasion....